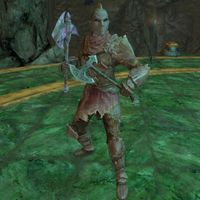 Vesparth the Toe is a Dark Elf member of the Tribunal Temple. She follows what are considered heretical doctrines by the New Temple. She is the descendant of a family of Buoyant Armigers, and wields the Cleaver of St. Felms, a holy artifact of the old Tribunal Temple. Along with others, she forms a circle around the inner sanctum of Ashfall's Tear, akin to that of the Hands of Almalexia. She can later be recruited as a follower if you side with the heretics. She is one of the few followers who are able to dual-wield any of the given one-handed weapons. Although her default armor is light Chitin Armor, she specializes in heavy armor. Vesparth can also become a personal steward.

Vesparth wears Chitin Armor, Chitin Boots, and Chitin Bracers, and carries both the legendary Cleaver of St. Felms and a Steel War axe as her weapons. She also carries several food items, 2 Lockpicks, 33 Gold, and her Journal. She does not carry any arrows that you can trade.