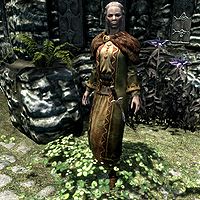 She may confide in you, "I'm dying for a rest. I swear, I could lie down right now, and just sleep forever."

The Dignitary wears fine clothes along with a pair of fine boots. She wields an iron dagger in combat.

This Skyrim-related article is a stub. You can help by expanding it.
Retrieved from "https://en.m.uesp.net/w/index.php?title=Skyrim:Traveling_Dignitary&oldid=1152304"
Categories:
Hidden categories: