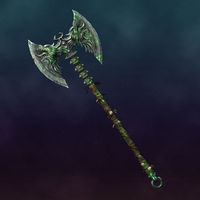 The Rueful Axe is a unique battleaxe. It is found in the possession of Sebastian Lort during the quest A Daedra's Best Friend, and may be given to you as a reward from Clavicus Vile for the murder of Barbas.

If Barbas is asked about the origin of the axe, he will tell of Sebastian Lort, a powerful wizard, and his daughter, who worshipped Hircine. Sebastian prayed to Clavicus Vile to cure his daughter of her Lycanthropy, and in response, the Daedric Prince gave him the Rueful Axe.