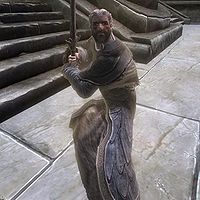 Felldir ready to do battle

Felldir the Old, a Nord warrior, is an ancient hero currently residing in the Hall of Valor in Sovngarde. He was one of the warriors, along with Gormlaith Golden-Hilt and Hakon One-Eye, who fought against Alduin, ultimately sending him forward through time using an Elder Scroll. He was also the architect of their plan to do so.

He and his compatriots later assist you in the final battle against Alduin in Sovngarde. Upon returning to Tamriel, you can summon his spirit using the first two words of the Call of Valor shout.

He wears Greybeard's robes with a pair of Greybeard's boots and is armed with an ancient Nord greatsword. He knows the following shouts: Fire Breath, Ice Form, Become Ethereal, Dismay, Disarm, Unrelenting Force, though when summoned with Call of Valor, he will only use Unrelenting Force and Frost Breath in combat.

When he is summoned, he will say, "I answer the call of the Dragonborn." or tell you, "Lead me into battle." In battle, he will yell, "Feel the thunder of my voice!", "You will die for the glory of the Dragonborn!", or "You are not worthy of Sovngarde!"