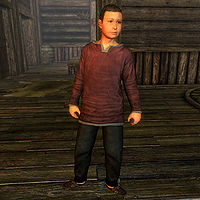 Samuel, an Imperial child, is one of the children living in Honorhall Orphanage in Riften. His mother used to work at the orphanage before she died when he was born. Although he has never met his parents, he hopes they will eventually come back for him. He is a friend of Aventus Aretino and will be overjoyed if you kill Grelod the Kind. If Hearthfire is installed, it is possible to adopt him after Grelod's death.

Upon entering Honorhall Orphanage for the first time, you can hear Samuel and his friends, Runa, Hroar, and Francois being threatened by Grelod:

Grelod: "Those who shirk their duties will get an extra beating. Do I make myself clear?"
Orphans: "Yes, Grelod."
Grelod: "And one more thing! I will hear no more talk of adoptions! None of you riff-raff is getting adopted. Ever! Nobody needs you, nobody wants you. That, my darlings, is why you're here. Why you will always be here, until the day you come of age and get thrown into that wide, horrible world. Now, what do you all say?"
Orphans: "We love you, Grelod. Thank you for your kindness."
Grelod: "That's better. Now scurry off, my little guttersnipes."

Samuel then returns to his normal schedule: he sleeps from 10pm to 6am, waking up to wander around the orphanage. At 10am, he plays with his friends in the yard for one hour before he returns inside. He has a one-hour meal at 3pm.

He wears child's clothes and a pair of shoes. He carries a selection of food and toys, and a small amount of gold.

When you pass by him, he will wonder, "Why's someone like you want to hang around a place like this?" If Grelod still lives, he will also tell you, "Come to get yourself a kid? You're out of luck. No way Grelod will let any of us get adopted. Especially not since Aventus took off." or "Grelod ain't going to like some stranger just hangin' around. Not that I care."

Grelod will often complain to Constance Michel about him, saying, "Samuel is getting to be a problem. Fancies himself something of a 'leader' to the other children. Put an end to the nonsense, or I will." Although this line was likely intended for Francois, she may also say, "I can't abide Samuel's [sic] constant talk of his parents. 'They're coming for me.' 'This is only temporary.' The boy must accept his fate." Constance will claim to have the problem handled soon.

He and his friends will be delighted to see Grelod dead. Samuel will cheer, "Ha ha ha ha ha! Hooray!" or "Hooray! Grelod the Kind is dead at last! We're saved!" He may also ask you, "Did you see that?" Before you return to Aventus, he may comment, "When Aventus took off, when he said those things, about killing Grelod... I never imagined he was serious..."

Now that Grelod is dead and Constance is alive to take over, Samuel will remark on the change: "Constance don't care much for strangers in the orphanage. Afraid someone might hurt one of us kids. Which, I gotta admit, is kind of nice."

If you wish to adopt him, ask him to introduce himself first. He will reply, "Name's Samuel. Never met my parents. Grelod said my mother worked here at the Orphanage, but she died when I was born. Constance and the others are nice enough, but I... I want to have a real family." You can then adopt him.