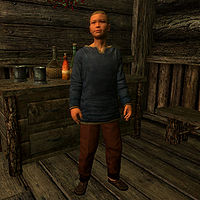 Francois Beaufort is an Imperial child who lives in the Honorhall Orphanage in Riften. His parents left him at the orphanage around a year prior to the events of the game, and he is waiting for them to return and collect him, as they promised him they would. However, it's likely he was abandoned. He approves of Aventus Aretino's plans to summon the Dark Brotherhood, and hopes Grelod the Kind will be killed. Once she is, he cheers with joy along with the other orphans.

During your first visit to the orphanage, Grelod can be heard verbally abusing Francois and his friends, Runa, Hroar, and Samuel:

Grelod: "Those who shirk their duties will get an extra beating. Do I make myself clear?"
Orphans: "Yes, Grelod."
Grelod: "And one more thing! I will hear no more talk of adoptions! None of you riff-raff is getting adopted. Ever! Nobody needs you, nobody wants you. That, my darlings, is why you're here. Why you will always be here, until the day you come of age and get thrown into that wide, horrible world. Now, what do you all say?"
Orphans: "We love you, Grelod. Thank you for your kindness."
Grelod: "That's better. Now scurry off, my little guttersnipes."

He then resumes his normal schedule: he gets up at 6am and stays in the orphanage building. He heads to the yard at 10am, playing with the other children for one hour before returning inside. At 3pm he is allowed to eat for one hour, and goes to bed at 10pm.

He wears child's clothes and a pair of shoes. He carries a selection of food and toys, and a small amount of gold.

Before you kill Grelod, he will tell you, "I do hope mummy and father come to get me soon. Ever since that Aventus boy left, Grelod has been so angry.", "My parents dropped me off here a year ago. But they're coming back to get me. They said so." or "You look kind of scary. But nobody is scarier than old Grelod." If Constance Michel is alive, he will also say, "Constance Michel says we have to be careful of people we don't know."

He will be overjoyed to see the cruel headmistress die, as he'll exclaim, "Oh my goodness!", "We love you, Dark Brotherhood! Ha ha ha ha ha!" or "Yay!" Before you return to Aventus, Francois will also express his disbelief: "I can't believe it! Grelod is dead! She's really dead!" If you murdered Grelod before going to Aventus, he will comment, "I do hope mummy and father come to get me soon. Ever since that Aventus boy left, this place has gone mad."