A View to a KillEdit 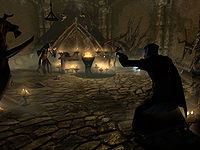 While travelling southwest of Riften, you may come across the ominous Darklight Tower. The guards in Riften are concerned about the place, stating: "There's a foul presence coming from Darklight Tower… Some say the place is home to necromancers." When you enter the tower, you will be witness to a murder; an Imperial elemental mage has killed a witch. Seeing you, the mage, Illia, tries to explain. Illia is near desperate, trying to escape the depravity of the coven within the tower. She was tasked with locating a human sacrifice so that her mother, Silvia, can conduct a ritual to become a hagraven. Illia takes responsibility for the horrific things she has done in the tower, but makes a stand against taking an innocent life. She asks you to help her stop her mother's vile plan. 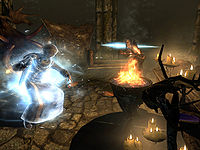 If you agree to help her, Illia will start ascending the stairs, but will typically wait for you to catch up. On each level of the tower you'll encounter a witch or hag and an assortment of creatures such as skeevers, frostbite spiders, or trolls. Despite being casters, witches and hags are very weak and Illia, unlike them, is a very capable frost mage. Battling through to the third floor, you may notice a locked door requiring a key on the way up. Illia has this key, and it can be pickpocketed, however, it's probably not worth the effort to pickpocket her or kill her for this, as the room only contains a cupboard with several potions. Once the quest is over, you can take Illia's key freely if you ask her to be a follower. Stopping at a portcullis, Illia warns of a hagraven ahead. Pulling the lever will open the gate and allow you to slay the hagraven, as well as any other creatures on this level. A copy of the Illusion skill book 2920, Sun's Dawn, v2 is on the table by the hagraven's tent.

Continue into Darklight Chambers, killing the witches. Here you will come to a master-locked door. Illia says that one of the hagravens carries the key. She then hopefully asks if you can pick the lock. If you decide to retrieve the key from the hagraven, Illia will wait at the door for your return. The hagraven you are looking for is in the room off the corridor to the east, accompanied by a hag. Once you have the locked door open, Illia will resume the ascent to the top of the tower. You will meet more hags and creatures on your way up, as well as a copy of the Destruction skill book Mystery of Talara, v3 on a table on one of the landings. 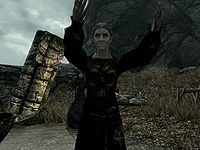 Once you reach the top, Illia explains that her mother is just on the other side of a closed door; and Illia has a plan. She's going to present you to her mother as the sacrifice and while her mother is preparing, you and Illia can kill her mother together. While a difficult decision, Illia seems resolute. She would rather her mother die at her hands than have her turn into a monster. Open the door to an open area where her Silvia has prepared the ritual. Illia will begin the charade and Silvia will ask you to sit on a chair in order for the ritual to begin. At this point you can either outright kill Silvia or trust that Illia isn't merely playing you for a fool and sit in the chair. If you do sit in the chair, Silvia will begin the ritual and Illia will make good on her promise to stop her. Silvia is fairly tough, compared to the residents of the tower, but no match for you and Illia combined. Once Silvia's path has ended, Illia will ask for no sympathy; she plans to leave this all behind. Illia thanks you and allows you to keep her mother's Staff of Hag's Wrath as payment for your help. You can ask Illia if she would like to come with you and she seems eager at the chance to, "do some good for a change". She will then be your follower. Before leaving, be sure to pick up the Destruction skill book Horror of Castle Xyr, sitting atop the table next to the tent.