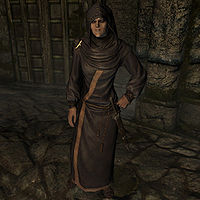 Illia is an Imperial elemental mage who lives in the Darklight Tower along with her mother, witches, and hagravens. Her mother plans to become a hagraven, but she needs a human sacrifice for this. Illia wants to stop her mother by killing her.

Upon arriving in the tower, you witness Illia killing a witch. She explains the situation about her mother and asks you if you can help her. If you agree, the quest Repentance is started. After completing the quest, you can ask her to become your follower. She will return to the tower when you dismiss her. She can also be recruited into the Blades and become a personal stewardHF.

She is a very powerful mage and favors frost spells. She wears blue mage robes and a pair of boots. She also carries a key, which opens two doors inside the tower - one containing two barrels and a chest, and the other containing a few barrels with fruit and a cupboard with some potions standing on it. She is equipped with a leveled dagger, which can be up to glass quality.