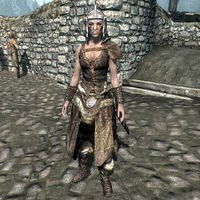 Njada Stonearm is a Nord warrior and member of the Companions. She resides in Jorrvaskr within the walls of Whiterun.

When you enter Jorrvaskr for the first time, you will find her engaged in a brawl with Athis, a fight that she always wins. She is an expert trainer for Block, and if you are a member of the Companions she will train you up to level 75. She isn't very social and likes to keep to herself. During the day she can be found around Jorrvaskr, either outside by the training dummies or inside, where she eats meals and sleeps in the living quarters.

She will remain unimpressed with you once you become the Harbinger, but will still follow orders and accompany you into battle. However, at this point she becomes a potential candidate for marriage, and can be recruited as a follower.

Njada is clad in a set of hide armor, including matching pairs of bracers and boots, as well as a hide helmet. She is equipped with a Skyforge steel sword and a steel shield for close combat, and a hunting bow with iron arrows for ranged combat.

"Oh, it's you."
"I'm still trying to figure out why Skjor let you in in the first place."
"If the Circle vouches for you, I'm sworn to respect their judgment. But that doesn't mean I like it."
"What guidance could you offer me?"
"What now?"
"You don't belong here. What do you think you have to offer?"

Why did you join the Companions?
"So I wouldn't have to answer stupid questions from idiots."

Who are the Companions?
"Are you looking to join? I wouldn't get your hopes up. The short answer is: we fight. The long answer is... eh, forget it. You're not worth my time."

Who's in charge around here?
"You don't just waddle in here and get to speak to the boss. Who do you think you are? If you want to embarrass yourself, I won't stop you. Kodlak is the Harbinger. He's the closest thing you'll find to a leader around here."

Can you train me to Block?
"I can. It might save your life."

What does it mean to be a Companion?
"Just because you've been accepted here so quickly, don't think I'm going to help you rise any faster. Fight well, don't be a lout, and you'll be fine. You don't need my help."

Skjor has fallen to the Silver Hand.
"Unfortunate. He was an excellent sparring partner. I'll miss our training sessions."

"I suppose you think this makes you better than me cause you can do that, huh?"

Njada: "I've heard some rumors... about you and Skjor."
Aela: "And if you want to keep having ears, you'll pretend you didn't."
Njada: "Is it not allowed?"
Aela: "It's not exactly forbidden, but even so... it's not true. So that's that."

Aela: "How do you manage to hold your ground like that?"
Njada: "You have to remember, it's not about strength. It's about leverage."
Aela: "But strength doesn't hurt."
Njada: "Well, no. I'm just saying there's more to defense than muscle."

She can be overheard speaking to Skjor:

Skjor: "Heard you had a bit of trouble near Solitude last week."
Njada: "Just those same ruffians I was bringing in for the Shatter-Shields. So much wasted breath in that crew."
Skjor: "I'm imagining you just standing your ground and letting them tire themselves out."
Njada: "I'm telling you, it works. Let them ring their own ears on my shield, then scoop them up off the ground."
Skjor: "We all have different means to glory, Stonearm. Well done."

Skjor: "I've got a bad grip on my shield, could you take a look at it?"
Njada: "I'm a warrior, not a blacksmith."
Skjor: "Can't you just tell me if the grip is bad?"
Njada: "If Eorlund made it, it's more likely you're gripping it wrong. Find me tomorrow and we can go over it."