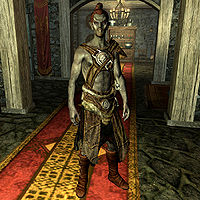 Athis, a Dark Elf warrior, is a member of the Companions living in Jorrvaskr within the city of Whiterun.

When you enter Jorrvaskr for the first time, you will find Athis engaged in a brawl with Njada Stonearm, a fight that he always loses. He's adept in one-handed combat and will offer expert-level training in it up to level 75, if you are a member of the Companions. He keeps quiet most of the time, but will not tolerate repeating himself. He is civil and loyal, but never at the forefront of any battles.

Athis wakes at 6am and heads to the main hall to eat breakfast and wander around until 7am. He then heads outside to the training area where he'll socialize, drink, and watch people until noon, then goes downstairs to the Living Quarters to eat lunch. Around 1pm, he'll take to wandering around the main hall again. At 4pm, he'll go back down into the Living Quarters and walk around until 8pm before going to bed.

Once the Companions questline is completed, Athis can become a follower, a new member of the Blades, and a candidate for marriage.

"I swear, every wanderer who shows up in Whiterun looks weaker than the last."
"I always thought the new Harbinger would be taller, myself."
"I never thought they would actually let me join the Companions. But now it looks like they're letting anyone in these days."
"Ah, fresh blood. Hope you know how to handle yourself."
"To what do I owe the honor?"
"Look, I've got training to get to."
"Are you thinking you're better than me? I crawled west out of the wasteland, so show some respect."
"I avoid going to Eastmarch if I can. Something in the air... I think it's just too close to the border."

He can be asked questions:

Who's in charge around here?
"Soon enough, it'll be me. In the meanwhile, the Circle handles our daily routine, and Kodlak advises them as Harbinger."

Who are the Companions?
"Why would you even come to Jorrvaskr without knowing what we stand for? This is not play-acting, here. We are the true spirit of Skyrim. Honor is in our blood, death in our hearts. If you seek either, you've found the right place."

I'd like to train in One-Handed weapons.
"I can teach you a few things."

If you walk past or start a conversation with him as a Dunmer, he'll say:

"We are all Ashlanders now, brother/sister. Good to find another family that cares where they came from, eh?"

After you join the Companions he can be asked about what it means to be a Companion, if you ask again he will have a different response:

What does it mean to be a Companion?
"It means signing on for the Nord ideas of how to live your life. Honor, battle, glory, all that. "Even an elf can be born with the heart of a Nord," Skjor said when I joined. I think he meant it as a compliment."

"To me, it means not having to answer foolish questions a second time."

After The Silver Hand is complete:

Skjor has fallen to the Silver Hand.
"He has joined the honored dead. This will be a difficult time for us all."

You can overhear him talking to other Companions:

Athis: "What kind of weapon do you prefer? I like the smaller, quicker blades."
Torvar: "Yes. You're quite fond of saying that. You know I like hammers and axes."
Athis: "Aren't they slow? I can get in and out before you can have one swing."
Torvar: "Let's test that out some time."

Athis: "You might do well to learn a new weapon. Vary your style a bit."
Farkas: "Tiny blades don't hurt enough. A sword needs weight."
Athis: "But ten little cuts..."
Farkas: "All I need is one to cut you in half."
Athis: "Well, when you put it that way..."

Farkas: "You only use the little swords."
Athis: "It's called a shortsword, oaf. It's quicker. Sharper. Like a razorfish against a whale."
Farkas: "But whales eat razorfish."
Athis: "And they always come to regret it."

Torvar: "One day, when you and I are on the Circle, we can change the way things are run around here."
Athis: "I don't think that's how the Circle works."
Torvar: "They're lording it over us all the time, though."
Athis: "Young warriors are smart to listen to older ones. They've lived."