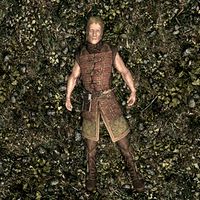 Lynoit is a Nord Dawnguard member whose body can be randomly encountered after completing either The Bloodstone Chalice for the vampires or A New Order for the Dawnguard. He carries a key to Dawnguard caches and his orders.

He is found with the remains of three vampires around him. He wears Dawnguard armor, boots and gauntlets, with a 75% chance of wearing a helmet, any of which can be the light or heavy versions. He wields either a Dawnguard war axe or warhammer.

On the small island south of Solitude Sawmill.
Due east of the entrance to the ruin Volskygge.
On the east side of Karthwasten Bridge.