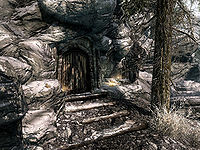 Lost Echo Cave is a small cave near the northwestern coast of Haafingar occupied by Falmer.

The cave is located on a bend where the road that leads west past Fort Hraggstad turns to the south. Piles of stones mark stone steps from the road up to the entrance, which unusually for a cave, is a wooden door with lit candles on either side and a statue to the right. 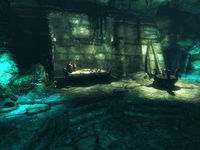 At first sight, the cave seems to consist of only two chambers. When entering, there is a dimly glowing tunnel that leads to the first, misty chamber, which contains a large urn. There is another tunnel that leads to the second chamber. Opposite the tunnel is an altar with numerous items on top, including a random armor, gauntlets, helmet, war axe, and dagger, as well as three burial urns, a silver necklace, the book Old Tome, and a copy of the One-handed skill book 2920, Morning Star, v1. In the rubble to the southwest behind the large pillar is a partially buried burial urn. Near the altar is also a ceremonial brazier, which can be activated by burning a glowing mushroom in it. This opens a nearby hidden door. There are many mushrooms found growing on the cave walls throughout the cave system, as well as several hanging moss and a patch of fly amanita fungus growing in one of the tunnels.

Once you have opened the hidden door to the east, the tunnel leads to another chamber containing two leveled Falmer, at least one of which is a magic-user. The chamber contains two Falmer tents, and a fenced area with chaurus egg sacs and three loose chaurus eggs. One of the tents is on a ledge above you; to reach it, head towards the next passage, then turn left behind the large pillar on the left to find a ramp up. Inside the tent is a Falmer weapon, and to the right is a Falmer chest. The other tent is to the right of the passage and has a gate. It contains four loose glowing mushrooms. To the right of this tent is a quicksilver ore vein. Along the next passage is a Falmer nest on the left-hand wall, which houses a Falmer that will jump out as you approach. Just after the nest is a side tunnel heading south.

Take care as you pass through the side tunnel, as there is a tripwire around a corner at the bottom of a slope that triggers a claw trap from the left. There is also a leveled magic-using Falmer. At the end, past an open gate, are the bodies of a dead bandit and a dead Imperial, with an unlocked Falmer chest beside them. Back in the main passage, there is another Falmer nest with a leveled Falmer inside. Around the next corner are two more nests, both containing Falmer. On the left is a brightly lit spot with rocks that can be climbed and a hole in the ceiling with some hanging moss growing; under this hole, on the rocks, is a large coin purse, a satchel, and a random fortify skill potion.

The passage opens into the final area, where two chaurus, a leveled chaurus hunterDG, and a leveled Falmer are all near each other, leading to another challenging fight. Once these enemies are dealt with, there are many chaurus egg sacs, a Falmer nest, and a tent with a gate containing an unlocked Falmer chest. There are plenty of human bones scattered around. To the left of the tent is a short tunnel with a handle on the left that opens another concealed door at the end, providing a shortcut back to the first chamber.