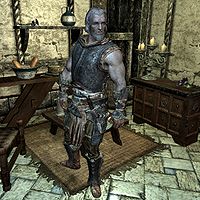 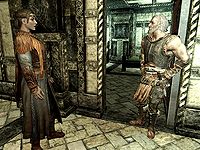 "What news have you heard from the war, Irnskar?"

Irnskar Ironhand is a Nord warrior who lives in Solitude where he acts as Thane Bryling's personal protector. He is owed a substantial gambling debt by Octieve San, an old Breton who also lives in Solitude. During the related quest, you will have to settle things for Octieve San.

Irnskar lives a busy life in Solitude, although not exactly as intended (see bugs). He sleeps in Bryling's House between midnight and 8am. He then spends the entire day inside the house, and only ventures outside on two occasions; at 10am he visits Radiant Raiment for two hours, and at 2pm he visits Solitude Blacksmith, also for two hours.

Irnskar wears a set of iron armor, boots, and gauntlets. He carries a belted tunic, an iron dagger, a key to Bryling's house, and a selection of lower-class items and gold.

When you approach him, he will say: "Unless we have specific business, I'm not interested." He will also tell you: "When I was a young rascal, I broke a man's arm with a single punch. Course, I had a horseshoe hidden in my glove..." Due to the bug in his schedule, his other greeting can only be heard when Bryling is at home between 8pm and midnight: "I think Bryling's the one you want to talk to. I'm mostly just here to scare away the riff raff". If Bryling is dead, he will replace her (at least temporarily) as thane, and will greet you with: "You don't want to talk to me. I'm just a stand in for a dead Thane."

Irnskar may be seen talking with Bryling about everything from the civil war to her new gown from Endarie:

Bryling: "What news have you heard from the war, Irnskar?"
Irnskar: "You won't like it, my lady."
Bryling: "I'm well aware that I won't like it. But it's my duty to keep my people safe. Tell me."
Irnskar: "Possession of the holds change on an almost daily basis, but I can report that Haafingar is still secure. Your people are safe."
Bryling: "I'm not just talking about my subjects. I'm talking about my people: the proud Nords of Skyrim."
Irnskar: "I told you you wouldn't like the news."

Irnskar: "My lady, I'm pleased to inform you that you have a new gown for court, specially tailored by madame Endarie."
Bryling: "Really? How did we afford that? Besides, I like the gown I already have."
Irnskar: "Madame Endarie insisted. She made it free of charge, in honor of your lenience about last month's rent discrepancies."
Bryling: "That was suspiciously nice of her. I thought she hated everyone."
Irnskar: "She does, my lady. But apparently, she hates you just a little less than the others."

If you talk to Octieve San, he may say: "Take my advice. Never gamble. Damn Irnskar has me in debt up to the eyes." When asked to elaborate, he will tell you: "Too many drinking games, too many bets, and I'm too old to ever raise the coin on my own." When you promise him to rid him of his debt, he will finish conversation with: "He's a stubborn oaf. I don't know what good it'll do." When confronted with the idea of remitting the debt of Octieve San, he will respond: "Debts are debts. Either he pays them, or his kind do." You can then choose between four options, with differing replies, displayed in the table below: