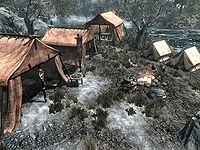 Hjaalmarch Imperial Camp is an Imperial camp in Hjaalmarch, located south of Ustengrav.

This camp will only be present if the Stormcloaks control Morthal and the rest of Hjaalmarch, whether through martial might or via the negotiation during Season Unending.

*This person only resides here during the related quest.

The Imperial Soldiers are camped here, under the command of Legate Taurinus Duilis except during the related quest when Legate Rikke takes command. Like similar military camps that only exist when the hold has changed hands, there is no quartermaster here.

The camp consists of a central campfire with the rest of the camp arranged around it. There is a cooking spit hanging over the fire with an anvil and a grindstone beside it. To the northwest is the commander's sleeping quarters with the command tent to the right and the hospital tent to the left. The sleeping quarters contains a single owned bed with a dresser beside it and an unlocked chest at the foot of the bed. Inside the command tent is a table covered with a tactical map of Skyrim and an end table in the corner. The hospital tent contains four bed rolls, three of which are occupied, a low table holding a random potion of healing and a random potion of health, and an unlocked chest containing various items to treat the sick with including samples of cure poison, cure disease, various other potions, leather strips, a saw, etc. To the left of the hospital tent is a workbench, while to the right is an alchemy lab and some barrels. Northeast of the campfire are three small, one-man tents containing unowned bedrolls. To the south of the campfire is a wood chopping block. There are no horses picketed at this camp.