Skyrim:Hall of the Dead (Markarth) 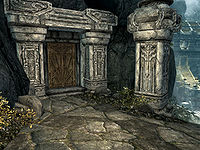 The Hall of the Dead is a large building in Markarth where the corpses of the deceased are laid to rest.

There are two entrances to Markarth's Hall of the Dead. The first is found near the entrance to the Hag's Cure and the Markarth Ruins. The second is found inside Understone Keep next to Calcelmo. The Hall is home to Brother Verulus and the starting point of the quest The Taste of Death. It consists of one area, Hall of the Dead.

* Moves to Reachcliff Cave after the related quest.

Hall of the Dead interior

There is very little within the hall. To the west of the shrine are a barrel, two bottles of alto wine, a cheese wedge, and a sample of wheat. To the east of the shrine is the skill book 2920, Rain's Hand, v4 above an owned bed.