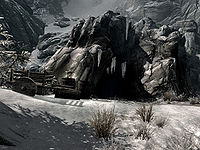 Haemar's Shame is a cavern that is home to vampiric worshippers of Clavicus Vile. It consists of two zones: Haemar's Cavern and Haemar's Shame. 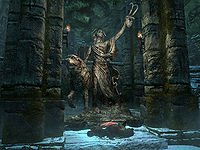 The entrance leads into a natural tunnel, which after a few paces turns south. The passage opens out into a chamber with a large wooden scaffold opposite, and two food barrels beneath it. There is a vampire thrall at the top of the structure. A wooden ramp leads up to a small table and chair, with three loose iron arrows on the table. Next to the table is an unlocked chest. The way forward is to the east. The passage takes a couple of turns before it leads to another chamber. There is pressure plate at the top of a wooden ramp, which triggers a spike wall trap and a leveled vampire patrolling the bottom of the ramp.

The passage descends to the west, before it takes a couple of turns and then opens out onto a ledge above a chamber, with another wooden ramp leading down to a campfire with a small table and chair facing away from you, there is a vampire thrall sitting at this table which has gory human bones in bowls on top. There is a charred skeever on a spit cooking over the fire that can be harvested for a charred skeever hide. Beside the campfire are two food barrels and a raised wooden platform in the southern corner of the room, where a leveled vampire is standing. On the platform, there is a small table and chair covered in blood with an iron helmet on the left. Beside this is a cooking pot, with a cupboard next to this with a filled petty soul gem, copies of The "Madmen" of the Reach, Ruins of Kemel-Ze, Biography of Barenziah, v1, Biography of Barenziah, v2 and The Song of Pelinal, v1 on the shelves. To the right of the cupboard is an unlocked chest. On your right is an alchemy lab, and another small table and two chairs with an iron dagger on top. Above the lab is a rabbit hanging from a rack, with a pheasant on the floor underneath, both of which can be harvested. Under the ramp are two sets of shelves with a random helmet, a bowl of frost salts and void salts, a random healing and magicka potions, along with two further random potions. There are also a couple of coffins in the cave. The exit from this cave is to the west, passing on your right yet another table, this one with a dead Imperial and a woodcutter's axe on top.

The passage twists, turns and continues to descend before opening out into another chamber, which has two levels, around the outside is a raised level (the level you enter on) and in the middle a lower level. There is a wattle fence around the edge of the drop, with a leveled vampire on your right and a vampire thrall on your left, both patrolling the top level. There is also a leveled vampire on the lower level that may be alerted to any fighting. On the upper level there is a tunnel to the south leading to a small room, containing a set of shelves in front of you holding a ruined book, a potion of ultimate magicka, a potion of minor healing, a goat cheese wedge, a bottle of wine, a food sack, and copies of The Real Barenziah, v3, and v4. To the southwest is a small table holding an iron dagger, and against the west wall is an adept locked chest. There are also two hanging cages and three coffin in the room.

Back in the split-leveled cave there is a wooden ramp down to the lower level in the northwest corner. Following the ramp down you will see that it splits, left and right, to the left it continues down to a tunnel heading north into the next section Haemar's Shame. While to the south is a table and chair, with a leveled vampire sitting in the chair, unless they've already been dealt with. There are three dead bandits between the bottom of the ramp and the table. If you alert the vampire sitting at the table at any point they may raise these bandits to aid them in the fight. On the table are two ruined books, two random potions of healing, a deadly aversion to magic poison, copies of Antecedants of Dwemer Law and destruction skill book Response to Bero's Speech. There are two sets of shelves behind the table holding; copies of Aedra and Daedra, Dwemer Inquiries Vol III, Song of the Askelde Men, Mixed Unit Tactics, a gourd, and a ruined book. There is another sets of shelves to the right of the table holding copies of The Book of Daedra, Ancestors and the Dunmer, two copies of Chance's Folly, The Song of Pelinal, v5, Mystery of Talara, v 1, The Wolf Queen, v7, Brief History of the Empire, v3, Brief History of the Empire, v4 and also three ruined books. There is also a bench and two coffins in this bottom level. Back tracking and taking the exit to Haemar's Shame.

Following the tunnel east, then south it opens into a chamber containing a frostbite spider, once it is dealt with there are two spider egg sacs that can be harvested. Another tunnel continues to the south, twisting and turning before you come to a room with several hanging cages, a table holding an iron dagger and salt pile, a second table with a built-in arcane enchanter with a random soul gem next to it. There is also an unlocked chest and set of shelves opposite, on the shelves are copies of Ancestor and the Dunmer, Brief History of the Empire, v1, Brief History of the Empire, v4, The City of Stone, Spirit of Nirn and another iron dagger. The tunnel heads west and then back to the east, following a stream, with a vampire thrall patrolling this area.

To the south is a passage that takes a few turns leading out into another two leveled cave, on a ledge opposite the Shrine of Clavicus Vile with a leveled vampire to your left. The boss and one other vampire will be at the bottom near the front of the shrine, with the final vampire up the stairs behind the shrine. A dead bandit is at the bottom of an earthen ramp that leads down to the bottom level, on your right and a dead Imperial in front of the shrine that they may raise to aid their fight. Once they have been dealt with, you will find, in front of the shrine a leg of goat, a haunch of horse meat, two stone bowls containing two loaves of bread and seven red apples. There are stairs either side of the shrine, leading up to behind the shrine, an unlocked boss-level chest and a shortcut exit. This is blocked off by spears, with a chain on the right that lowers the spears.