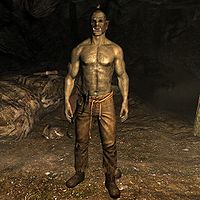 Gadba gro-Largash is an Orc warrior found working in Narzulbur's Gloombound Mine. He stays inside the mine all the time, never eating or sleeping, though he occasionally sits for a break. He is originally from the Largashbur Orc Stronghold, but he left there the same time his brother Mul did.

Gadba wears a pair of ragged trousers along with a pair of boots. He carries a pickaxe along with a leveled war axe, which can be up to Orcish in quality.

Gadba seems to have a fairly simple outlook on life, pointing out that he just follows his brother: "Mul is the smart one. I go where he tells me." He finds mining to be a difficult task: "Mining is tough, but Mul says the money is good so we mine." Along with his brother, he plans on returning to Largashbur someday, but points out that he may miss Narzulbur when they leave: "When we go back to Largashbur we'll be kings. I like Narzulbur, but don't tell Mul."

He can be overheard conversing with his brother:

Mul: "How much longer do we have to work this backwoods mine?"
Gadba: "A bit longer, yet. We need more money if we want to be chiefs of our own."
Mul: "But I thought there was only one chief."
Gadba: "Well, right. One of us will be a chief."
Mul: "What about the other one?"
Gadba: "Which other one?"
Mul: "The other chief!"
Gadba: "There's only one chief!"

Mul: "Do you ever get a weird feeling about those sisters?"
Gadba: "Who has a sister?"
Mul: "Mauhulakh's aunts. You know... the way they're all around him all the time."
Gadba: "That's just how it is with families. When we're chiefs, you'll see how it is."
Mul: "Can we both be chiefs?"
Gadba: "Not today, we can't."

Gadba: "Sometimes I think your head is made of rocks."
Mul: "That would be good! I could use it to smash other rocks. Easier to mine, then."
Gadba: "Oh, good point. I wish my head were made of rocks."

Dushnamub: "Father, I'm worried about Gadba and Mul."
Mahulakh: "What about them?"
Dushnamub: "You don't worry about two Orc men coming into your stronghold? That they might challenge you?"
Mahulakh: "They're miners. Harmless."
Dushnamub: "I've just learned not to trust luck around here."