If you manage to get Malborn out of the Thalmor Embassy alive at the end of Diplomatic Immunity, he will run all the way to Windhelm seeking shelter in the New Gnisis Cornerclub, a Dunmer tavern located in the Gray Quarter. Due to his treachery, Malborn is obviously blacklisted by the Thalmor, and has decided to flee to Morrowind; however, every time he tries to sneak out of Windhelm, he sees a suspicious Khajiit outside the gates. Convinced that the Thalmor have sent an assassin to kill him, and still blaming you and Delphine for putting him in a tight spot, the scared Malborn is now stuck in the Cornerclub and will request your assistance to get him to safety. 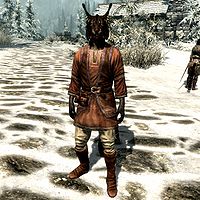 An assassin waits for his prey outside Windhelm

A Stranger in Their MidstEdit

Malborn will not provide a description of the supposed Khajiit assassin, instead just saying that he is standing outside the city gates. Your map marker will disappear when you exit Windhelm, so cross the pathway and make your way to the Khajiit trading caravan camped near the Windhelm Stables. You will find the caravan leader Ma'dran in his tent and his fellow Khajiit roaming around, offering their services. Start asking around and one of the more talkative Khajiit, Ri'saad, will point you towards a stranger in the group called J'datharr, who stands on the fringes away from the others. When approached, J'datharr will initially try to brush you off, but upon hearing that you have a message from Malborn, he'll reply with: "Malborn? Ah... very good. I think we understand each other." After saying this, he will break his cover and attack you; the Khajiiti caravanners will not intervene on either side, so it's a simple duel to the death. After the kill, loot his body and read his note, obviously written by the Thalmor. Lastly, return to the Cornerclub and tell Malborn the good news. He will be grateful and will reward you with some of the gold he stole from the Thalmor. He will then leave Windhelm, head towards the safety of Morrowind, and disappear from the game.