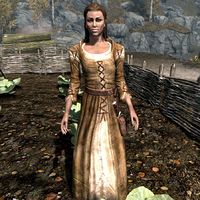 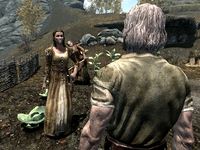 Fastred getting berated by her father 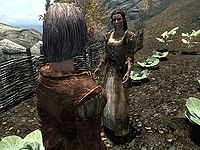 Fastred being told to work a little harder

Fastred is a Nord farmer and a resident of Ivarstead. She lives with her parents, Boti and Jofthor, at Fellstar Farm. She harbors dreams of becoming an adventurer, and will pester you for tales of your adventures. However, her dreams seem to be interfering with her work on the farm, as her parents can be overheard chiding her to "pitch in a little more".

She is infatuated with Bassianus Axius. Depending on your actions in The Book of Love, Fastred's love life can be considerably altered. After initially approaching her and revealing that you have been sent by Mara, she asks you to confront her parents regarding her wish to be together with Bassianus. She will elope with him to Riften if you mention to Bassianus that her mother is supportive of the relationship. However, if you decide to encourage an old love, Klimmek, to be more assertive, she will end up with him instead and opt to stay in Ivarstead.

She wears a belted tunic and a pair of boots. She is equipped with an iron dagger, and carries a key to the farmhouse, as well as a selection of common loot and gold.

When she is still living in Ivarstead, Fastred will be quick to ask you about your travels.

"Oh! You're a traveler! You must have so much to tell about the world outside this boring town!"

No matter where she is, Fastred may also greet you with:

"Have anything interesting to tell me?"

She will also reveal to you how she wishes she could be a traveler and journey across the world.

"I can't imagine how exciting it must be like to journey from place to place. You're so lucky!"

You can ask her about High Hrothgar.

Anything you can tell me about High Hrothgar?
"The Greybeards are a strange bunch. I heard they live their entire life without uttering a single word; can you even imagine?"

She will close dialogue with: 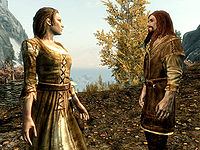 During The Book of Love, Dinya Balu enlists you to help Fastred resolve her issues with fickle love. When you talk to Fastred, she will ask:

You can respond in two ways:

Yes. What's troubling you?
"My parents are being impossible. Bassianus wants to marry me. And I think I love him. But he wants to move to Riften afterwards, and my father won't allow it. He only cares about this stupid town, but Bassianus makes me happier than anyone ever has. My mother's not any help, either."

How did you know I was coming?
"I prayed to Mara and she spoke to me in a dream. She said a stranger would appear to help me. Is that you?"
Yes. What's troubling you?
(Same response as above)

You again have two options:

You sound a little confused.
"I don't want to choose! They're both so amazing."

I'll talk to your parents about it.
"Oh, thank you so much! It's wonderful to have someone around who understands."

If you speak with Fastred after this, she will urge you to talk to her parents.

"Have you spoken to my parents yet? Please, my love depends on it!"

Talking to her parents will reveal that she had previously been in love with Klimmek. You can choose to help either Bassianus or Klimmek in their relationship with Fastred. If you convince Bassianus to elope with Fastred, Bassianus will run to her and they will have the following conversation:

Bassianus: "Fastred, we must speak."
Fastred: "Bassianus, sweetie, what is it?"
Bassianus: "We must leave. Your father will never approve of us, and I grow weary of this place."
Fastred: "Where will we go?"
Bassianus: "To Riften, my pet. How you'll adore the city."
Fastred: "Oh, and to be with you!"
Bassianus: "I'll make the preparations immediately!"

On the other hand, if you encourage Klimmek to be more bold and declare his feelings for Fastred, he will run up to her and the following conversation will play out: