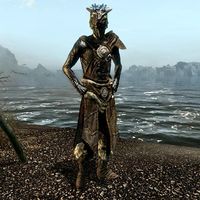 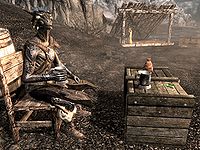 Deekus is an Argonian assassin who resides at a campsite on the beach near Hela's Folly. He is a target for assassination in a Dark Brotherhood contract.

Deekus spends most of his time wandering around the campsite, guarding the items he has collected from the nearby shipwreck. He wakes up at 8am and immediately begins to wander around his campsite. He can usually be found having a quick meal or drink while seated on the nearby chair. After a day of patrolling around the campsite, he heads to his bedroll at midnight where he will sleep for the next eight hours.

Deekus wears a set of hide armor with a matching pair of boots. He is equipped with an iron dagger. The campsite has a locked chest and several containers. On the tables and near the bed are various gems and gold, as well as a statue of Dibella, all of which will be counted as stolen regardless of if Deekus is killed. Mind the bear traps near the chests. All items found in the camp respawn after a period of time, whether he is alive or not. Nazir will provide you with some information on Deekus if you ask him to tell you about your contract. Deekus likes to scavenge shipwrecks, and will run away if threatened.

He may tell you to leave, saying either:

Like most assassination targets, you may choose to have a conversation with Deekus.