This article is about the randomly encountered assassin. For the corpse in Hag's End, see Dark Brotherhood Assassin. 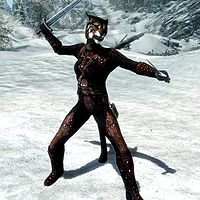 Assassins of the Dark Brotherhood are occasionally sent to track and subsequently make an attempt on your life throughout the game. The assassin's race and gender will vary between an Argonian female, a Dunmer male, or a Khajiit female.

The assassins appear as random encounters starting at level 5. Unlike hired thugs, the assassins appear for no reason and there is no way to avoid encountering them. A note detailing their mission can always be found on their bodies. The note reads:

As instructed, you are to eliminate <Alias=Player> by any means necessary. The Black Sacrament has been performed - somebody wants this poor fool dead.

We've already received payment for the contract. Failure is not an option.

After completing either the With Friends Like These... or the Destroy the Dark Brotherhood! quest, you are no longer in danger of being attacked by these assassins.