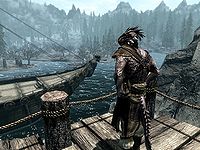 Jaree-Ra waiting for you at the docks

In Solitude, find an Argonian named Jaree-Ra leaning against a wall under the stairs closest to the gate. Speak to him, and he asks how you would like making some gold. He then (if you indicate interest) tasks you to put out the fire in the Solitude Lighthouse. A ship called the Icerunner is due to soon come into port, and without the lighthouse fire to guide it, it will crash on the rocks. This leaves it open to be plundered. Jaree-Ra assures you that the men aboard won't be harmed, and 'may even be grateful for the daring rescue we'll perform'. After you agree to snuff the fire, he tells you to meet him again by the Solitude docks. He also warns you to not speak with him beforehand, lest you arouse suspicion.

Head northeast to the Lighthouse. There should be no guards in the building, although you may see Ma'zaka. Once you make it to the top, activate the fire to put it out. Then travel back to the Eastern Empire Company Warehouse and find Jaree-Ra. He will tell you that the ship never made it to port, and to go and find the wreck on the north coast (it will be marked on your map). He says his sister Deeja is already aboard, and is waiting for your arrival.

At the wreck of the Icerunner, you have two ways to proceed. The Blackblood Marauders will not be aggressive when you arrive and you can simply visit Deeja for your "reward". Or, you can begin slaying marauders.

Despite Jaree-Ra's words, the sailors aboard are all dead. Deeja is waiting down in the ship's hold. She will tell you that she was expecting you, and that you'll get what you deserve. Speak to her, and she will explain that the plunder has already been moved, and that you need to be 'taken care of'. She will then turn hostile and attack; kill her, and then loot the body, retrieving a note from Jaree-Ra which explains that the plunder is at Broken Oar Grotto, and that Deeja should kill you once you've arrived. The rest of the Marauders will now turn hostile too; fight your way back to the top deck and make your escape.

Once free of the ship, head to Broken Oar Grotto. In the cave is a network of scaffolding and wreckage. There are two Marauders at the top of the scaffold to the right. You can hear their conversation if you sneak up on them:

Once at the top of the scaffold, take care of the two Marauders, then follow the path up the slope. Continue along the ledge until you see the drawbridge, and take out the Marauder guarding it. Pull the lever to release the bridge and cross to the next ledge. The battle ahead will be quite tough, so it's a good idea to save beforehand.

You have two options to continue:

Heading down the left-hand walkway (which is free of Marauders) will lead you around the cave and will end on a ledge overlooking the ship where Jaree-Ra is hiding. You can pick some of the enemies off from this spot with a bow or ranged magic; if not, release the drawbridge and continue across to the ship and deal with Jaree-Ra and his gang.

Going into the cave on the right will bring you into the Marauder's living area, where there are two enemies but also loot. The cave comes out at roughly the same place as the walkway, but shows a path upwards towards the cave roof. A Marauder is keeping watch near the top of this path, so take care of him before proceeding to the peak. From here you have a good vantage point over the ship, and can take out more of the Marauders with arrows before they can reach you. Be aware that the path continues down to the ship on the other side, and that Marauders can easily run up behind you if you aren't careful. Defeat the marauders and kill Jaree-Ra. After Jaree-Ra is dead, loot his body and the nearby chest for a large amount of gold and various gems. The quest completes once you kill him. Additional loot can be found in the Icerunner Chest, which is located on the top deck of the shipwreck in the water.