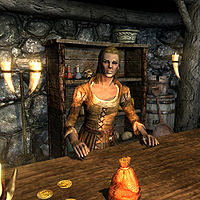 Birna is a Nord pawnbroker who runs Birna's Oddments in Winterhold and feels depressed about how little custom the shop has; her only regular customer is the housecarl, Thaena, who isn't the most friendly person. Her brother, Ranmir, has a tendency to drink away their earnings.

Birna wears a belted tunic and a pair of boots. She is equipped with an iron dagger, and carries a key to Ranmir's house as well as a selection of common items and gold.

Since Ranmir spends much of his time drinking inside the Frozen Hearth, Birna must dedicate most of her time to running the store in order to support both herself and her brother. She wakes up at 7am and unlocks the door to the store. She will then stand behind the counter in the store for the next thirteen hours, offering her services between 8am and 8pm. After a busy day of running the shop, she will leave at 8pm to head to the Frozen Hearth. She will find a seat and eat and drink with the other regulars for the next three hours. At 11pm, she will make her way back home. She will stay up for another hour, until heading upstairs to sleep for the next seven hours.

If you ask her if she has ever had a bad deal after asking about her business, she will explain how she came to possess a seemingly useless dragon claw:

You said something about a bad deal?
"Yeah, it was stupid of me. I shouldn't have believed the story and just refused the trade. But I didn't, and now I'm stuck with this worthless junk."
What was the story?
"Some line about this claw thing and Yngol Barrow. He said it was worth more than its weight in gold if I took it back there. Something about placing it back in Yngol's chamber, I don't know. What was I thinking? Even if it were true, I'm not setting foot in some ancient tomb, filled with who knows what."
I could look into it for you.
"I don't even care any more. You want to check it out? Fine. I'll sell you the thing for fifty gold, and then it's your problem."
I'll take that claw for 50 gold.

If you try to buy it from her without enough money, she will say:

If you do have the required amount of gold, she will give you the dragon claw:

"Fine, here you go. You get killed on account of this thing, it's not my fault. Got it? But, I suppose, if it does actually turn out to be worth something, let me know, will you?"

Despite this request, you cannot inform her of the true treasure the claw protects.

Approaching Birna will have her inform you that almost everything she has is for sale and information about her brother:

"I'll sell just about anything, if it's worth my time. Keep that in mind, will you?"
"I do what's necessary so we can get by. Have to, since I can't count on my brother for anything."
"If you're looking for Ranmir, he's either passed out in bed, or working on winding up that way."
"My brother's a good-for-nothing drunk. We'd have lost the house by now if it were up to him."
"Just because we live in the middle of nowhere doesn't give Ranmir the right to drink himself into oblivion."
"Ranmir has no problem drinking himself under the table, so I have to be the one to make ends meet."

If you assist Ranmir in stopping himself from drowning his sorrows, she will instead make a series of comments about how her life has been improved now that her brother isn't drinking her profits away:

"Things are easier now that I don't have to worry about Ranmir anymore."
"I still can't believe you were able to help Ranmir pull himself together."
"Without all our money going to drink, I can afford to expand my selection a bit."

When speaking to Birna directly she can be asked questions:

Why set up shop here?
"Wasn't by choice, I can tell you that. Options were in short supply. Ranmir and I grew up here, and nearly any money I make, he drinks away. Without the coin to pack up and leave, I decided to take to trading."

Do you get much business way up here?
"Very funny. I'm sure you've noticed that Winterhold isn't exactly overflowing with people. So I'll sell whatever I can. If it's worth putting a price on, you can bet I'll do it. I've been burned a few times, made a few bad deals, but mostly I come out on top."

If you choose to invest in her business:

I'd like to make an investment in your business.
"You want to give me money? Just like that? Fine, but I intend to earn that investment. I don't need handouts."
Let's see what you can do with this.
"I'll work hard to justify your faith in me." 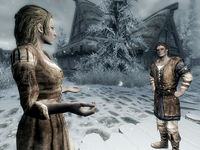 The first time you enter into Winterhold, you may encounter Birna and Ranmir arguing on the road:

Birna: "We need coin, Ranmir, and you're not bringing home any."
Ranmir: "And you'd have me do what, join the College and prance about casting spells all day?"
Birna: "Don't just walk away from me! Where do you think you're going?"
Ranmir: "To the Inn for a drink, of course! Where else could I even go in this gods-forsaken town?"
Birna: "And what, you think that'll solve all your problems?"
Ranmir: "Probably not, but it's worth a try!" 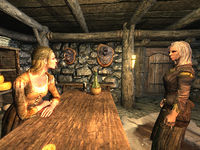 Birna and Thaena having a discussion

Birna will have a few different conversations with Thaena, during her visits:

Birna: "How are you today, Thaena?"
Thaena: "Same as ever. Trying to keep from freezing to death, trying to keep food on the table."
Birna: "Always looking on the bright side, aren't you."
Thaena: "Don't sass me, little girl."

Thaena: "You got anything in here worth buying?"
Birna: "I certainly hope so, otherwise I'm wasting my time."
Thaena: "Yeah, well I don't see anything." 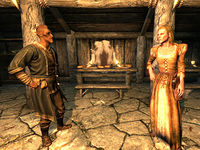 She can also converse with Enthir about business between the two:

Birna: "You looking for anything in particular this time?"
Enthir: "Perhaps, perhaps. I'm not quite sure what I need."
Birna: "Well, you know the drill. You don't see it here, it's gonna cost you extra for me to get it."
Enthir: "I'm fully aware of the terms of our... arrangement."

Enthir: "Have you gotten the items I requested from you?"
Birna: "Not yet. You know you're asking for some pretty strange stuff, don't you? It's not easy to find."
Enthir: "You assured me that you could find it, however."
Birna: "I did, and I will. It's just tougher than I thought."

Should she meet with Ranmir inside The Frozen Hearth, she will either angrily ask about their money or desperately try to get him to return home:

Birna: "Well, isn't this a surprise!"
Birna: "How much of our money have you spent today, Ranmir? Anything left, or is it all gone?"
Ranmir: "If I wanted to get yelled at, I'd be home. Can't you leave me be?"
Birna: "Oh, I'm sorry. Am I bothering you? Am I making your life more difficult?"

Birna: "Please, come home. Just... Just come home."
Ranmir: "Can't. Got at least two rounds to go."
Ranmir: "Why don't you go... sell something."
Birna: "Why? Because I'd rather be here trying to keep my only brother from drinking himself to death."
Ranmir: "Ha! Drink ain't gonna kill me. Not today, anyway."

Haran will also mention the conflicts between Ranmir and Birna in a conversation with Dagur:

Haran: "How long are we going to let Ranmir drink himself into a stupor? When will enough be enough?"
Dagur: "As long as he keeps paying, I suppose. He keeps to himself, and isn't hurting anyone."
Haran: "Are you so sure of that? I think Birna might disagree with you."
Dagur: "It's not my place to get involved in their family's business, remember? You're the one that told me to stay out of it."