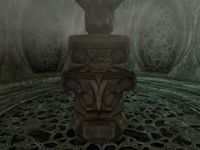 Untold Legends is an area of Hermaeus Mora's plane of Oblivion, Apocrypha. There are five zones (or chapters) in the area: Chapter I, Chapter II, Chapter III, Chapter IV, and Chapter V.

The Black Book needed to access Untold Legends is found inside Benkongerike.

Chapter I opens at the top of a corridor. The corridor winds its way down past three fonts of magicka and a font of stamina to the book to Chapter II. By the third font of magicka is a table with three soul gems (two random, and one leveled).

Chapter III is a treasure room guarded by a seeker. On the table is a pod, a random soul gem, and a copy of the Spell Tome: Conjure Seeker (but only if your Conjuration skill is at least level 40).

Chapter IV is to the south of the book leading to it, with a font of stamina to either side of the entrance. There is a font of magicka halfway along the corridor ahead, with the passage leading to a room with six alcoves, three on either side. The room is guarded by three seekers, and requires you to activate four scryes to open the next corridor.

The first alcove to the left has an apprentice-locked pod, two soul gems (black and greater), and four skill books, for four of the "stealth" skills: Advances in Lockpicking (Lockpicking), Beggar (Pickpocket), The Gold Ribbon of Merit (Archery), and The Rear Guard (Light Armor). The second alcove on the left is currently inaccessible, and the third alcove only has a font of stamina.

The three alcoves on the right-hand side each contain a font of magicka, and while the first and third alcoves have a pod (the pod in the third alcove has a novice lock), the middle alcove has a scrye outside it to open the gate, and one inside to open the gate for the middle alcove on the left-hand side of the room. Inside that alcove is an adept-locked pod and another scrye that opens the central platform, and on the platform are four fonts of magicka and a scrye to open the southern gate to the corridor ahead. Flanking the southern gate are two fonts of magicka, and beyond the gate, just before the book to Chapter V, is a vessel.