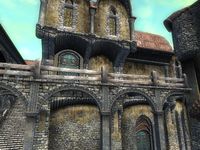 Rendil Drarara's House is a house located in the alleyway east of The Missing Pauldron.

It is owned by the cook Rendil Drarara, who is the only resident. His house has a wide variety of ingredients stored in it, and all of the containers respawn. The main entrance reveals a large staircase to the upper level and three respawning food barrels under it in the northeast corner. Through the open doorway a fireplace mantel holds four garlic clusters hanging from it. A dining area in the southeast of the room houses three wine racks that hold a total of twenty-one bottles of cheap wine, and the table in front of them is set with a loaf of bread, digestive slime, grummite eggs, a smoked baliwog leg, and two more bottles of cheap wine. 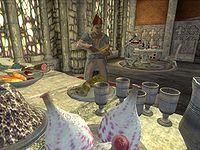 "So much to bake, so little time!"

A kitchen area lies to the north. On the east wall, an open-top barrel holds a sample of black tar, an alocasia fruit, an aster bloom core, and a red kelp gas bladder. Two clutter crates are stacked in the northeast corner beside an open-top barrel that holds twelve fungus stalks. The counter on the north wall holds several ingredients; five red kelp gas bladders, three samples of unrefined greenmote, three alocasia fruits, three flame stalks, three screaming maws, two smoked baliwog legs, a blister pod cap, congealed putrescence, digestive slime, an aster bloom core, and a pod pit. In the northwest corner, a set of shelves hold three sweetrolls, two worm's head caps, and a loaf of bread. The cupboard beside it holds food, with three samples of black tar and three clusters of grummite eggs on top of it. The basket beside it holds congealed putrescence, a pod pit, and a hydnum azure giant spore. The upstairs area is rather sparsely furnished. A respawning cupboard in the southwest corner beside the double bed holds clothing. The table in the middle of the room is set with blister pod cap, congealed putrescence, an aster bloom core, and five bottles of ale. A door in the northwest corner leads to the second floor balcony.