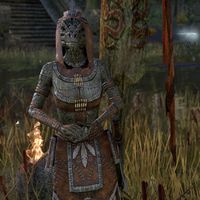 Xijai-Teel is an Argonian found in the Deep Graves of Shadowfen. She is hoping to have a hero investigate a strange Altmer visitor and help her silence a menacing force in the cemetery.

Early in the quest, Xijai-Teel can be found standing at the top of a xanmeer, near the Deep Graves skyshard. Speak to her then, and she'll say:

"Fruitful travels to you, wanderer.
Have you one to remember in our marshes?"

Midway during this quest a ghost will appear and draw you to the center of the cemetery. There you'll witness the following scene:

She will banish the spirit and beckon you to follow her:

"I have not seen her attack prey so fiercely. What quarrel does she have with you?"
I freed some travelers from the wisps. Could that be it?
"Her voice commands the lost souls, so that's a likely reason. I weep for the other travelers who fell prey to her traps.
You should leave our cursed gravesite while you still can."
But you destroyed her, right?
"No, she is not destroyed. Only silenced for a time.
She is old, perhaps as old as the swamps themselves. I do not know what caused her to take an interest in the living, but this does not bode well for any of us."

"I wonder if this has something to do with our new visitor? We've never entertained an Altmer before.
Or it may just be coincidence."
What do you mean?
"Valrendil seemed harmless. At first, he studied our ways. Then he began taking tokens and other discards from our rituals. That was odd, but did no harm.
Then he was caught digging up some of our graves. He said he simply wished to examine them."
Is he a necromancer?
"He didn't disturb the bodies. It's something else.
I want to understand him, but he won't discuss it with me. He's set up camp not far from here. Perhaps there are some clues there."
I'll see what I can find out.

Speaking with her again:

"If you can, don't hurt him. He's a troubled creature, but no harm to anyone. And he is very courteous."

Return from your investigation, and she'll say:

"Are you well? All around you, I see marks of that spirit's tendrils.
You have been to the Altmer's camp. What did you find?"
He introduced me to his wife.
"Wife? He came with no wife. How could ….
Ah. How foolish of me. Our wispmother has assumed the form of Valrendil's dead wife. She is strong. Far greater than the simple spirit I thought her to be. This is dangerous."
How can I stop her?
"Legends say you cannot destroy wispmothers, just as you cannot destroy the moon or stars. No, her essence must be sealed, or else she will rise from the swamps again.
She's taken a fancy to her new lover. This we can use against her."
Do you have a plan?
"I always make plans. Ssaa. We must seal her in something ancient and powerful.
See the far xanmeers? Each holds fragments I need to make a prison. I'll prepare the ritual site. Gather the pieces and meet me where the newly dead are buried."

Speaking with her again before retrieving the relics:

"Once she has grown bored with her Altmer lover, she'll discard him for another.
And like a man-eating beast, she has grown a taste for mortal attentions."

Meet her after finding the relics, and she'll say:

"The urn you carry once contained the cursed souls of those who can never return to the Hist. It was punishment for their blasphemies against the Saxhleel.
It's lost some of its power through the ages, but it will still serve our purpose."
What do we do?
"I must conduct the rite. Your duty is simple: do not let any souls enter this circle, or they will become trapped as well.
Let me know when you are ready."
I'm ready. Let's begin.

However, if you're successful, she'll tell you:

"The artifact is ready. Do not unseal it until it's time."
When should I unseal it?
"You should take the vessel to the wispmother. She is powerful right now, so first, you must weaken her.
Then open the vessel, so it can take in her corrupted soul."

"You may need help from Valrendil to reach the wispmother.
I don't think Valrendil will want to help you, though."
Do you think she is still in the cave?
"I don't know where else to look. Poor Valrendil. I fear the wispmother will use him. She'll force him to protect her, even though violence is against his nature.
You must be kind to him, and she must be stopped."
I agree. I'll make sure she's sealed.

Speaking with her again:

"The Altmer harms no one, but by remaining here with her, he harms us all.
I will pray for his safety, but the wispmother must be stopped. Do what you must."

If you told Valrendil that you'd put an end to this yourself, Xijai-Teel will be waiting outside the cave:

"Were you successful? I came to help, but there was a ward on the door. I couldn't get past it."
I sealed the wispmother, but Valrendil also died.
"An unfortunate, but not unexpected, turn of events.
Hopefully, this Wispmother has taken her last victim for a few generations."
You mean she'll escape again?
"Just as the moon cycles through the month, true evil cannot be destroyed.
But there was more to this wispmother than evil. There was love. Its love was twisted, but I think it cared for him."

"Deep Graves will be safe for its pilgrims once again. I am saddened for the Altmer. I will see that his body is properly buried here.
He has suffered enough. Perhaps now there will be peace for him."

After the quest, if Valrendil lives:

"Deep Graves will be safe for its pilgrims again.
And the Altmer may remain here, if he wishes. He's suffered enough. Perhaps here, he will find happiness once again."