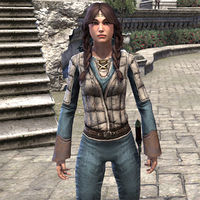 Vivienne Muric is a Breton member of the Mages Guild in Lillandril who is trying to challenge the Sapiarch's investigation into a supposed murder of one of their compatriots by Emile Oncent.

When you approach The Fighters Guild hall in Lillandril, you'll see a short cut scene:

Vivienne Muric : "Stay strong, Emile! I'll get you out of this!"
Sapiarch Soraturil : "Secure the prisoner in the Fighters Guild. Off you go."

When you go to speak to Vivienne, she'll have this to say:

"You! You're a member of the Mages Guild, aren't you? Please, you have to help me.
The Sapiarchs accused one of our compatriots, my best friend, of a murder he didn't commit. They won't even consider the possibility that he's innocent!"
Who do the Sapiarchs believe your friend murdered?
"Another Sapiarch named Haladan. Emile arrived at the gates of Lillandril carrying Haladan's body and confessed to the crime. But he seemed shocked—confused.
I know Emile better than anyone. He's not capable of something like this, I swear it."
If Emile confessed, why do you think he's innocent?
"He's a pacifist, for Mara's sake!
The Sapiarchs' investigation was a joke. They just took Emile at his word and handed down the sentence. Of course, the local Guild Magister rolled over like she always does. Coward. Please, I need your help."
All right, I'll help you investigate. Where do we start?
"The Sapiarchs say Emile confessed to murdering Haladan, but he'd never murder anyone. He loved Haladan! I don't know if he's confused, or disoriented, but I do know he wouldn't do it!
Please, talk to Emile. Convince him to recant his confession."

What's your relationship with Emile?
"Emile and I are both members of the Mages Guild chapter here in Lillandril, and students of the guild's chief diplomat, Calawende.
As for our relationship, Emile is my dearest friend. Has been since we were both in diapers."

If you can't convince him to retract his confession, why do you think I can?
"I don't know if he'll listen to anyone, but I don't have a choice. The Sapiarchs and Mages Guild consider the matter settled, and they've forbidden me from speaking to Emile further.
No one has forbidden you to speak to him. You can still reach him!"

Who are the Sapiarchs?
"An order of High Elf scholars and mages. They walk the halls of power here in Summerset, observing and advising. Of course, there's a thin line between advising and ruling by proxy.
They're not overfond of us Guild mages. They think we're reckless."

Are you? Reckless I mean?
"To the Sapiarchs, stepping in puddles is reckless. Not folding your linens is reckless. By their standards, my ninety year-old grandmother is wild as a foal in springtime.
No, the Guild values new ideas, novel approaches, but it's far from reckless."

What can you tell me about Haladan, the murdered Sapiarch?
"He and Emile were very close. If you'd asked me before all this happened, I'd have wagered that one or the other was shopping for a Ring of Mara.
They had common interests, but more than that, they had common values. Gods, what a tragedy."

What were their common interests?
"Restoration magic. Wards against disease and curses, that sort of thing.
They'd been researching ways to prevent lycanthropy, vampirism, and other afflictions. You see? The Emile I know dedicated his life to healing people, not murdering them."

You don't think this could have been a lovers' quarrel?
"Absolutely not. Emile's gentle as a lamb, and Haladan didn't have a conniving bone in his body. The tension between the Guild and the Sapiarchs weighed on them a bit, but not so much that it would drive them apart.
Like I said—Emile is innocent."

Speaking to Vivienne before continuing the investigation, she'll say:

"The Mages Guild and Sapiarchs are united in accepting Haladan's guilt. No one else will help. You and I are his best advocates.
If you have any questions, please ask. You should know all the facts before you set out."

Speaking to her before Emile after going to Saltbreeze Cave:

"You're back! Did you find any evidence that might exonerate Emile? You must have found something."
I need to speak with Emile before I can say anything definitive.

After speaking to Emile:

"By Magnus! If what you say is true, Emile's innocent!
You seem hesitant. Don't get bogged down in the details of his experiments. The important thing is that he didn't murder Haladan. You have to take this to the Sapiarchs!"
You aren't worried the Sapiarchs might try to kill Haladan's friend, Norasea?
"She's a vampire! I grew up in Shornhelm, and I know how dangerous they are. They drink people's blood for Mara's sake!
Look, I pity Norasea, but we can't destroy Emile's life over one bad decision. Setting a vampire free is reckless. You know that."

If you are a Vampire:

I'm a Vampire.
"You're what? Well … that's as may be. I'm sorry if I offended you, but you're clearly the exception. A half-starved vampire recovering from some rare illness is dangerous. Period."
What about the damage to Haladan's reputation, and the Mages Guild?
"Haladan's dead! And if he truly loved Emile, he would gladly suffer humiliation to keep his beloved out of prison. You know that!
As for the Guild? The Guild endures. We'll be fine. Just do the right thing."

Speaking to her on the matter one last time, she'll not be as democratic as Calawende:

"I know Calawende plans to make Emile's imprisonment as pleasant as possible, but it's still prison. Emile has so much more to offer the world!
What's more important—a good man's life or a dead mer's reputation? Hardly seems like a choice to me."

If you decide to let Emile go free:

"You're doing the right thing. Emile will blame you for this, but I hope you'll forgive him. He suffered an unimaginable trauma. He's not in his right mind.
He'll recover, I know it. I'll be there for him. Calawende too. We'll get through this."

If you decide to respect Emile's wishes:

"How can you condemn an innocent man to prison? He's obviously out of his mind with grief!
I'd find a way to exonerate him myself if I thought anyone would listen. Damn your eyes! And the Sapiarchs!"