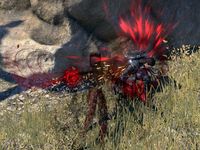 Veiled Strike deals Magic Damage to a single opponent, and causes them to become off balanced and stunned if you are invisible or in stealth mode. Its range is slightly greater than that of a melee attack, affording you a better chance of getting the stealth bonus without being detected. The Concealed Weapon morph increases your movement speed while stealthed or invisible, giving you an even greater chance of getting close enough without being seen. Alternatively, the Surprise Attack morph changes it to a Stamina cost, deals Physical Damage, and will reduce the enemy's armor, causing your subsequent attacks to do more damage.

1.4.4
* Concealed Weapon: Your stealthed movement speed bonus is no longer removed if another player character casts Shadow Cloak while stealthed.
1.5.2
* This ability will no longer stun and off-balance enemies who dodge the attack.
1.6.5
* Fixed an issue with the impact sounds on the abilities Flurry and Veiled Strike.
2.3.6
* Fixed an issue where this ability was not playing the correct audio during impacts.
2.7.5
* Adjusted the order of the Active Abilities in this skill line. They now unlock in the following order:
3.3.5
* Fixed an issue where this ability and its morphs would still stun and set an enemy Off Balance even if they could detect you with detection potions.
5.0.5
* Surprise Attack: This ability no longer applies Major Fracture. Instead, if you use the ability on the flank of an enemy (behind or at their sides), you reduce their Physical Resistance by 5%. This effect cannot stack, but will always prioritize the highest value.
5.1.5
* Concealed Weapon: Fixed an issue where casting this ability from crouch would apply the stun to your target, but not animate the stun.
5.2.5
* Reduced the base cost of this ability and the Concealed Weapon morph to 2295, down from 2700, to ensure they stand out more appropriately as melee spammables such as Lava Whip or its morph, Surprise Attack.
6.0.5
* This ability and its morphs now stun and set targets Off Balance when used from the flank of an enemy, rather than when you are stealthed or invisible. This change was done to offset the loss of the ability to activate this portion of the attack with the recent fixes to Heavy Attacks properly breaking invisibility.
Retrieved from "https://en.uesp.net/w/index.php?title=Online:Veiled_Strike&oldid=2680654"