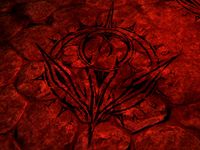 A trap created by Manifestation of Terror

Aspect of Terror summons a dark spirit which instills fear in nearby enemies, causing them to flee and reducing their movement speed. The Mass Hysteria morph also reduces their ability to do damage, while the Manifestation of Terror places two traps on the ground, one near you and another at a location of your choice, which will each cause the same fear and speed reduction of the un-morphed version.

Because Aspect of Terror is now more powerful against groups, we've made the initial projectile visible to help add counterplay to the ability.

This Elder Scrolls Online-related article is a stub. You can help by expanding it.
Retrieved from "https://en.uesp.net/w/index.php?title=Online:Aspect_of_Terror&oldid=2490291"