Spencer Rye runs a finder's business and uses the Thieves Guild to track down his quarries. Helping him will surely reflect well on your skill as a thief, and be lucrative to boot. 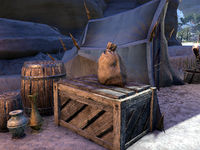 The spyglass is located in the middle of the cove

Read the Reacquisitions Board outside Thieves Den. There is a new message, announcing:

"A captain and his crew ran afoul of Maormer at Thrall Cove. The captain wants any crewmen that survived rescued, but also the return of his treasured spyglass. Only seasoned adventurers need apply. See Spencer Rye with the spyglass to collect the reward."

Head to the Thrall Cove, located on the western coast of Hew's Bane. The Captain's Spyglass can be found in a "Ditty Bag" near the Maormer Captain Virindi Slave-Taker. Attacking nearby NPCs will trigger the boss fight, so it's necessary to sneak up to it and quickly run away if you're attempting to recover the spyglass solo. The prisoners are scattered around the cove.

Once you have collected the spyglass and rescued three prisoners, head back to Spencer Rye outside the Thieves Den and inform him of the task completed. He will give you some gold as a reward.