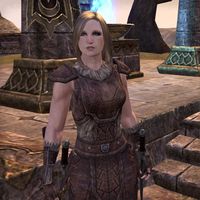 Thoreki is a Nord werewolf located in the capital city of each Alliance's fifth zone. She is the questgiver that sets you on the path to becoming a werewolf. She does not appear if you aren't infected with lycanthropy.

If you walk into Evermore, Rawl'kha or Riften while infected with lycanthropy, Thoreki will beckon to you somewhere near the city's wayshrine.

"I know you, brother/sister. You're one of us, even if you don't know it yet. Hircine calls you. His song is in your blood."
Hircine calls me?
"Think about it. Run into a wild creature lately? Suffer any unusual injuries? Maybe you felt a little drowsy earlier? And then your senses grew sharper.
I'm talking about Sanies Lupinus. Hircine's gift. Lycanthropy."
You mean I've been infected by a werewolf?
"Not infected. Chosen. But we can't talk about this here. Too public.
Here, take the scent from my glove. Embrace your new gift and follow the scent to our packmaster, Songamdir. He'll teach you the ways of the hunt, the ways of the pack."
I'll think about it.

You can then ask her more questions about the affliction and its progenitor.

"Look for the Packmaster. Just follow the scent. The pounding in your blood will tell you when you're close. You'll find him. I know it. He'll teach you the secrets of Hircine's gift."
Who is Hircine?
"Hircine is the Daedric Prince of the Hunt and the Father of Manbeasts.
It's a rare and precious gift he's given you—a chance to become a true hunter, one of his own."
What if I don't want to be a werewolf?/What if I don't want to become a "true hunter"?
"Then go to a temple, and find the priest. He'll be all too happy to cure you, for a fee.
But if you reject Hircine's gift, you'd best hope the pack doesn't find you again. If you won't be a hunter, you're prey."
What can you tell me about Hircine's gift?
"Hircine gave this gift to the first hunters to worship him. To honor them, he took their cunning and melded it to the strength and form of beasts.
It's said those original hunters live on in the Great Hunt, Hircine's own realm, to this day."