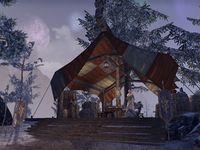 The New Life Festival is a holiday event that typically takes place in the month of December and January. During this event players can obtain a 100% XP buff and the opportunity to acquire a collection of New Life Festival-themed items. The festival also has a special quest associated with it, named The New Life Festival, which repeats every year. Completing the quest gives you Breda's Magnificent Mead Mug memento, which grants double XP for two hours when used. A notable feature of the event is the inclusion of the New Life Festival Box, special reward containers that grant players various event-themed items.

Since 2020, "Gateway to the New Life Festival" portals will be opened at the various Event Exchanges, offering one-way transport to Kynesgrove Wayshrine during the event.

For background information on the festival, see the lore page.

This box contains gifts that many celebrants would find of interest.

For completing a subsequent daily quest, you will receive one New Life Festival Box. Each Festival Box contains a guaranteed sample of Wolfsbane Incense, as well as a selection of items related to the New Life Festival. This includes unique recipes, provisioning ingredients, Skinchanger motif pages, Event Writs or rare collectibles. All of these items can be traded with other players. Rewards vary slightly each year as detailed below.

New Life Festival Boxes can be obtained as a quest reward from Breda and Petronius Galenus at the revelers' tent, just south of Windhelm. Each quest can be completed once a day, granting a maximum of 10 boxes per day, per character. In 2020 the Imperial-related quest was added to the available Event Quest Dailies.

Completing all nine activities unlocks the

"A direct request for a dozen simple furnishings, from the Orsinium Home for Displaced Children. Once accepted, this contract cannot be traded or sold. Completing 12 New Life Charity Writs will award you the Crystalfrost Skin."

"A direct request for a dozen simple furnishings, for communities in the coldest reaches of Tamriel. Once accepted, this contract cannot be traded or sold. Each Deep Winter Charity Writ completed will provide a Skaal Explorer Style Page, for use or trade."

One notable addition for 2019 was Deep Winter Charity Writs, which can also be found in New Life Festival Boxes. Similar to Charity Writs, they also request a number of furnishings or provisions to be crafted. Each writ completed grants a page from the Skaal Explorer Style. See the main page for details.

"A request for a single [provisioning/furnishing], crafted using [Skill Line], for refugees of the Three Banners War. Once accepted, this contract cannot be traded or sold. Each Imperial Charity Writ completed will provide a reward, for use or trade."

Introduced during the 2020 Event run were the Imperial Charity Writs, which can be found in New Life Festival Boxes. Similar to the previous Event Writs, they will request a number of furnishing or provisions to be created and brought to Selvari Abello. Each writ completed will grant a Refugee's Gift which contains a Style Page from the Rkindaleft Dwarven Style.

Earn bonus XP and rewards during the New Life Festival in-game event and celebrate another year of adventure in Tamriel!

The 2020 event ran from December 17, 2020 to January 5, 2021. A significant change in this year's event is the release of the Imperial-related Daily Quest—Old Life Observance—which can be started by speaking with Petronius Galenus at the New Life Pavilion Tent. Additionally, the charity writs from prior to 2019 will no long drop from festival boxes. In their place the new Imperial Charity Writs have been added to the event and will reward you a random page from the new Rkindaleft Dwemer style. Like last year, the Impresario will have all of 2020's released Indrik berries available for purchase.

Players can receive three Event Tickets each day by completing one New Life Festival daily quest. A maximum of 57 tickets can be earned by the end of the event. Along with the aforementioned berries, the Impresario will also sell Bound style pages for the Rkindaleft Dwarven Style and the Rosethorn Indrik and Snowball Buddy pets for 5 tickets each.

The drops from New Life Festival Boxes during the 2020 event are identical to previous years, except for the following removals and additions:

The following items were sold in the Crown Store during the event:

From December 12 2020 till January 6 2021, there is a gifting promotion. If you gift five or more Event Tickets to friends or Guild Mates you will receive four Akaviri Potentate Crown Crates once the Event ends. See Official Announcement for more info.

Celebrate an amazing year of adventure and comradery with the return of the New Life Festival. Earn bonus XP, event-unique rewards, and more during this merry fete!

The New Life Festival 2019 ran from December 19, 2019 to January 2, 2020. The event and rewards were almost identical to the previous year, focused around completing daily quests from Breda. It was the first opportunity to earn the Pure-Snow Berries of Ripeness from The Impresario, used to create the Pure-Snow Indrik evolution. In addition to new berry, the Impresario stocked all previous Indrik berries and feathers for all types of Indrik.

The event also included the new Skaal Explorer Style that can be obtained from the Deep Winter Charity Writs.

Players could receive two Event Tickets each day by completing one New Life Festival daily quest. Because of the postponement of the Undaunted Celebration Event, three additional event tickets per account per day could also be earned by killing any type of boss, giving a grand total of 75 possible tickets by the end of the event.

The following festival-themed furnishing items can be bought from Heralda Garscroft in Elden Root, Wayrest, Mournhold or Vivec City if the associated achievement is unlocked.

"Earn bonus rewards, get double XP, and celebrate the end of the year in style during the New Life Festival. Learn about all the quests, collectibles, Achievements, and more you can enjoy during this end-of-year event!"

The New Life Festival 2018 ran from December 13, 2018 to January 2, 2019. The event is similar to the previous year, but with the addition of new ice-themed skin, hats, furnishings and collectibles. New Life Charity Writs were also introduced during this event.

The 2018 festival was the fourth opportunity for players to work towards obtaining the Nascent Indrik mount. During the event, the Opaline Indrik Feather was introduced and could be purchased with ten Event Tickets, which players can acquire from completing daily quests from Breda. Completing any quest rewarded players with one Event Ticket per account per day.

The drops from New Life Festival Boxes in the 2018 event were identical to the 2017 event drops, including Skinchanger motif chapters, New Life food and drink recipes New Life hats, costumes and mementos. The 2018 festival introduced the following new items:

Prior to and during the festival, many event-themed items were on sale in the Crown Store:

"Get small to go large: this miniature Snow Globe Home is tiny on the outside but expansive on the inside, proving shrunken real estate is a big bargain! And to make the interior cozier, the exterior features an eternally-festive gentle snowfall. Magical!"

The Enchanted Snow Globe Home will be available to purchase for the first time.

December 2018 Daily Rewards associated with the festival include:

"Celebrate the end of another fantastic year in The Elder Scrolls Online with the New Life Festival. This merry event returns with a host of fun quests and festive holiday rewards for all. Find out below how you can celebrate New Life with us and earn free XP-boosting collectibles, acquire style materials and pages, unlock unique furnishings, and more!"

The drops from New Life Festival Boxes in the 2017 event were identical to the 2016 event drops, but with the addition of new furnishing items and runebox mementos:

"We're wrapping up an exciting year in Tamriel by celebrating the New Life Festival! This event is filled with quests that take you across different zones, and you have a chance to obtain fun and festive rewards."

The 2016 New Life Festival ran from December 15, 2016 and lasted until January 4, 2017. By completing the daily quests offered during this festival, players were able to find Skinchanger Style motifs, learn New Life Festival recipes, participate in parties for each Alliance race, and obtain exclusive collectibles. Completing the initial quest awarded the memento Breda's Bottomless Mead Mug, which could be activated repeatedly throughout the event to grant your character a 100% XP boost for two hours.