Online:Temple of the Hidden Moon 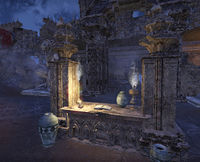 Remains of the Temple Grounds

The Temple of the Hidden Moon is a ruined sanctuary in the Ashen Scar. In the past, the temple was dedicated to Azurah and housed the Order of the Hidden Moon, adepts who would purge and redeem the Dro-m'Athra. After one of their own turned on them, the resulting civil war destroyed much of the original temple. In the surviving ruins lies their most important relic—the Moonlight Blade.

The remains of the temple grounds can be found at the summit, which is reached by climbing a long winding path. Some of Order's teaching stones are still legible:

Additionally, The Tale of Three Moons can be found on the altar.

Temple of the Hidden MoonEdit

Temple of the Hidden Moon

After being brought into the temple by Mazza-Mirri, she will lead you around and explain the events which lead to the current situation. Visions of the past will play before you.

This is the tomb of Shando-ri, the last Steward of the Moonlight Blade, whose mummified body can be found sitting on a throne with the Blade in his lap. Once you take the sword, Shando-ri's spirit will awake and he will ask you to take an oath to destroy Arum-Khal. There will be an opening in the wall which leads back to the Tomb of the Hidden Moon through a winding passage.