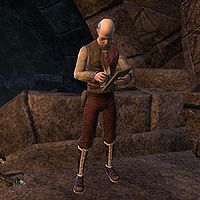 Haskill is the chamberlain of Lord Sheogorath. He is first encountered guarding the entrance to Cheesemonger's Hollow.

When you enter into the portal, he will dully greet you "Oh how quaint. A mortal."

"Well, what is it? Here for some noble purpose, no doubt."
I'm here for Arch-Mage Shalidor. I've been sent to retrieve some books?
"Spellbooks? How pedestrian.
As it happens, I'm feeling particularly charitable at present. I'll allow you to enter. After."
After what?
"After a test of your resolve. This isn't a lending library. If you want the spellbooks, you'll have to earn them.
A portal has been opened. Close it, and I'll grant you passage."
I'm ready.

While Scamps emerge from the portal:

Haskill: "Close the portal, if you can. Though you may want to deal with those scamps first."

Once the portal closed:

After closing the portal:

"That was unexpectedly competent. You'd make an adequate house servant.
I don't suppose you'd consider it? The pay is meager, but the fringe benefits are appalling."
No, thanks. I've only come for the books.
"Pity. The tomes you seek are beyond the door at the top of the stairs. Once you're outside, follow the path."
Thank you, Haskill.
"Just doing the Master's will. I will open the door for you.
Oh, and mind the scamps. The little imps adore fresh flesh. Such children."
Right.

As he walks away:

Haskill: "And please, try not to make a mess of things."

After he opens the door:

You also have the option of talking to him while he stands by the door:

"I'm so glad we've had this time together. One must usually go to a public execution for conversation of this caliber."
What is this place?
"Oh, just one of the many shrines to my lord. The common rabble know it as Cheesemonger's Hollow.
Sheogorath is fond of it, but rarely graces it with his presence."
Who are you?
"I am Lord Sheogorath's chamberlain. I handle his affairs and look after the Shivering Isles while his lordship is away."
The Shivering Isles?
"Are you lost? Do you know nothing of the place you've come to?
The Shivering Isles are Lord Sheogorath's realm in Oblivion. To tell you more would, as my lord puts it, spoil all the fun."
Thanks.

"I was beginning to wonder if you'd ever show up. My lord seems to derive amusement from my annoyance.
You are here to retrieve a tome for that … Shalidor person, correct?"
Yes. Where can I find it?
"Just a moment, mortal. Lord Sheogorath asks that you perform a task, first. To prove your competence.
He claims to have misplaced a pair of items. Items you must recover."
What items?
"A fork, and a staff. Please do try to be quick. My Lord enjoys making me wait, but he's not very patient himself.
I've opened a portal for your convenience. It should lead you directly to the fork."
A fork and a staff. Got it.
"I'd say 'at your leisure', mortal. But i expect I have more time ahead of me than you do."
Where will this portal take me?

"My lord is certain he lost his utensil somewhere in Skyrim. It was during a visit to his friend Korthor in Vuldngrav.
That was during the Merethic Era, I believe"
The Merethic Era?
"Ahem. My lord visited with Korthor a very, very, very long time ago.
Really, what do they teach mortals these days?"

Can you tell me anything about this fork?

"It's an heirloom. My Lord is quite fond of it. Has a bit of magic around it, too, I think.
I don't know. I don't question Lord Sheogorath."
What kind of magic?
"The fork excites and synergizes magicka around it. When held in the hand of someone more notable than yourself, it can produce dramatic results.
In your hand, it might be suitable for conveying roast beef to your mouth."

Haskill: "Come, mortal. Let's not waste time, shall we?"

Speaking to him before you go into the portal:

"I see you have the fork.
Competently done. Impressive, even."
Yes, I have it. What now?
"Now, for the staff. When last we spoke, my lord recalled the discomfort of desert sand.
I believe it lies somewhere within Hammerfell. In the dry and decayed hands of Prince Maleel."
Prince Maleel?
"Prince Maleel al-Akir, the Scyth of Yokuda. A formidable warrior, in his day.
That day was over a thousand years ago. But still."
I'll get the staff from the Prince.

Speaking with him again before stepping through the portal:

After retrieving the Wabbajack, he appears once more.

"Another successful retrieval, I see."
Yes, here's the staff.
"Very well then.
I've instructions to have you return to the Isles. My lord would have a word with you."

Speaking with him again before entering the Shivering Isles:

"Some time this Era would be convenient."

After reentering the Isles, he greets you.

If you speak to him before speaking to Sheogorath, he'll only say:

"Your business lies with Lord Sheogorath."

After Sheogorath asks you to "whack some folks with the Wabbajack."

"Try not to make too much of a mess."

After completing the task:

After returning the Wabbajack back to Sheogorath:

"Until we meet again, mortal. I'm sure the master will have more … "activities" planned for you by then."

"Ah, you're here. As punctual as a thespian. Very good."

You can return to him at the entrance of the area throughout the play for his commentary. After first speaking to Sheogorath:

"My lord is very excited to begin the play. As I am. I enjoy amateur performances."

After meeting Sheogorath in Heartholdhelm:

After killing the Pact Lead Roles:

"I see the show does not always go on."

"It is not wise to keep my lord waiting. His lucidity is as fleeting as my smile."

"The play is nearly done. Are you leaving the audience waiting? How avant garde."

After finding Sheogorath in Daggerwaymore:

"Aren't you finished yet?"

"That was a passable performance. For a mortal."

Haskill can be found within the Mages Guild Hall on Eyevea during The Mad God's Bargain. Once you manage to enter the hall, you will have to face the man himself as he fights in his master's place, wielding the Wabbajack.

Sheogorath: "Ahh, my favorite mortal. Shalidor finally figured out how to let you in. You're here to kick me out, I know. But fighting isn't really my thing. Haskill?"
Haskill: "Very good, sir. Ahem. Have at you, adept. We will now face each other in honorable combat. On your guard."

Once your opponent is nearing defeat, Sheogorath will call the match and teleport Haskill back to his side. After a decision is made regarding Valaste, Haskill will with his master through a portal.

This Elder Scrolls Online-related article is a stub. You can help by expanding it.
Retrieved from "https://en.uesp.net/w/index.php?title=Online:Haskill&oldid=2520320"