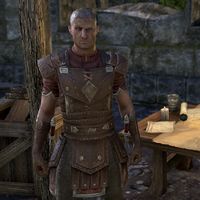 General Raetus is an Imperial and a former officer of the Imperial Legion.

After he refused orders to carry orders to slaughter a village of innocent Argonians, he was fired and left behind when the Legion retreated from Shadowfen. He then took over the abandoned White Rose Prison and liberated the inmates found within.

And Throw Away The KeyEdit

You must speak to him during the quest.

"What are you doing here? I have enough trouble without outsiders bringing more."
I've come on behalf of the vicecanons. They say a keystone is located here.
"The vicecanons expect our help? Where were the vicecanons when the Imperials left us to rot?
We've been trapped here for years. Half the prisoners lost their minds and started eating the rest of us."
Why didn't you just leave?
"Don't you think we've tried? My Imperial brethren used the power of your precious keystone to bind us to this prison. If we leave, we die.
No one bound to the keystone can even touch it."
But you know where it is?
"Let's make a deal. Ferals overran one of our camps. The survivors of that attack need patching up, but the medical supplies are still in the camp.
If you can recover those supplies, one of my people will tell you where the keystone is."
Agreed.
"Very well. Get the medical supplies to Jurni. She's holding the tower southwest of the camp against the ferals.
And remember: I'll hold you to our bargain. All of it."
I'll find the supplies.

You can ask him more questions after accepting his task.

"The longer we're trapped, the greater the chance we'll turn feral … or be eaten by them."
How have you survived here all this time?

"It hasn't been easy. Argonian traders stop by sometimes, and we've been able to forage enough old Imperial supplies to muddle through."

How did you come to be imprisoned here?

"I refused to slaughter a village of Argonians. It wasn't a fair fight. They had no soldiers.
I don't believe in pointless slaughter. My superiors thought otherwise."

Why did some of the prisoners go feral?

"Some think it's the keystone's influence. Using it to trap us must've had some effect.
Others think the feral were weak-minded, and broke under the strain of our situation. Who knows?"

If you betrayed the prisoners and took the keystone for yourself instead of destroying it, he will go feral. He has Gerent Hernik tied up by the guillotine.

He then attacks you.

"I felt it! When you used the keystone to free us, it was like shackles fell from my neck."
What will you do now that you're free to leave?
"Yesterday, I thought I'd spend my remaining years trying to keep these people alive. Now I have options, and that's a good feeling. Thank you.
You'll want to find the gerent and let him know about the keystone."
Good luck.

After the quest he'll say:

"I'd given up hope of ever being free from this place. Now I have to decide what to do with myself."