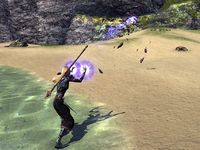 Crystal Shard will deal Magic Damage to a single opponent (or multiple opponents with Crystal Blast morph). Crystal Weapon converts the skill to Stamina, removes the casting delay, causes your next light or heavy attack to do more damage, reduces the target's armor, and reduces the cost of your next non-Ultimate ability. With the Crystal Fragments morph, casting any other Magicka-based spell has a chance to increase the damage and reduce the casting cost by half as well as removing the casting delay so it can be cast instantly.