< Elder Scrolls Online: Quests: Daggerfall Covenant / Main Quest
Vanus Galerion of the Mages Guild has a plan to stop Molag Bal's incursion of Tamriel. It requires convincing the three alliances to join forces with the Mages Guild and Fighters Guild to assault Coldharbour. 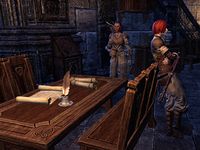 Talk to High King Emeric in the Hall of Heroes following the climax of the Alliance Story in To Walk on Far Shores. Alternatively, if you have not yet completed the Alliance Story, but have completed the main quest Council of the Five Companions, Vanus Galerion will teleport out of nowhere when you enter a safe area. Either way, you will be sent to the Mages Guild in Daggerfall to meet with Copper Dariah, leader of the Ring of Daggers, who has a message for you. Vanus Galerion has a plan to defeat Molag Bal.

Wait in the Mages Guild for Galerion, while Copper and Marisette discuss the Hidden Armigers and the Eyes of the Queen. Galerion arrives, and explains how he hopes to bring the alliances together to defeat the Daedric Prince. Both the Mages Guild and the Fighters Guild agree that they should act now, but the distrust between the alliances prevents the neutral guilds from doing so. He considers you the perfect diplomat to speak to each of the leaders about a meeting. He has found a meeting place, an island called Stirk, and arranged meetings with the leaders of the alliances. 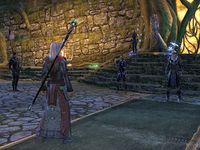 An audience with Queen Ayrenn

Galerion's portals lead directly to the throne room of each ruler where he introduces you to them. Each ruler is impressed by you and agrees to travel to Stirk.

You and Galerion return to the Fighters Guild in Wayrest. He gives you some gold but says the tricky part is yet to come.

Notes
* Any text displayed in angle brackets (e.g., <Alias=LocationHold>) is dynamically set by the game and will be filled in with the appropriate word(s) when seen in game.
Retrieved from "https://en.uesp.net/w/index.php?title=Online:Messages_Across_Tamriel_(Covenant)&oldid=2332507"