Briar Rock Ruins is a ruin located in the southwestern corner of the Reach. The ruins are currently inhabited by the hostile Thornroot Clan and their hagravens. The Thornroots have been kidnapping members of other clans and transforming them into briarheart warriors against their will.

A chest can spawn behind the statue at the lowest level of the crypt, all the way to the south. 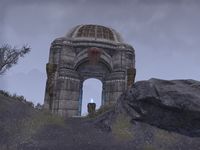 Briar Rock Wayshrine is located atop a hill east of Briar Rock Ruins. A copy of The Battle of Karthspire Lea is in a camp a short ways southeast of the wayshrine, near a water sack. A letter lies next to the corpse of Apprentice Gwerina beside a tree to the east.

This Elder Scrolls Online-related article is a stub. You can help by expanding it.
Retrieved from "https://en.uesp.net/w/index.php?title=Online:Briar_Rock_Ruins&oldid=2397740#Wayshrine"
Last edited on 28 April 2021, at 04:58