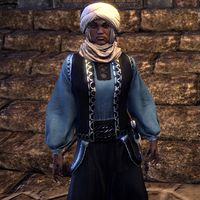 Aubatha is a Redguard in Bergama who officiates the Signal Fire Sprint event in Bergama during the New Life Festival. She is only present during the festival.

"You are unfamiliar, but not unwelcome. What brings you to Bergama?"
I'm here for the Signal Fire Sprint.
"You honor us with your journey.
Light Bergama's signal fires before I end my count, as Zoreh the Tenacious did long ago."

Who is Zoreh the Tenacious?

"Long ago, a great sickness swept through Bergama. Those who survived were gravely ill. This included Bergama's sworn blades ... her protectors."
Go on.
"Emeesh Poison-Tongue, a warlord of the sands, learned of of a Bergama [sic] weakness. One night his band of cutthroats approached the city, hoping to take our wealth and slaughter our people.
One sworn blade stood watch."
Zoreh the Tenacious?
"Indeed. Though afflicted, she alone stood her post. But she knew there was no hope against so many.
Yet, she knew how to save Bergama. If she lit the signal fires quickly, Emeesh would think the illness had passed. That our defenders were ready."
I'm listening.
"Zoreh sprinted to each unlit signal fire. Alone she ran, despite her illness, and lit every one. She rallied every sworn blade in Bergama.
As we took the field, Emeesh's band panicked and fled. Even ill, our defenders cut down every desert dog."
What happened to Zoreh?
"Sadly, the illness took her that night, but not before Emeesh was driven off. But Zoreh died knowing Bergama was safe.
So now, every year, we honor her sacrifice. Few could ask for a better legacy."

Actually, do you have any tips for lighting the fires in time?

"Zoreh wasn't called "the Tenacious" for endurance alone. Her keen mind allowed her to defend Bergama from its enemies.
As our hero did, learn where we keep each signal fire and plot your route."
What if I'm not fast enough?
"Our celebration is open to all‒the young, elderly, and injured alike. Consequently, the signal fires may be lit as a team.
Zoreh's love for her community was deep and abiding. Working together to light the fires does honor to her memory."

If you speak to her again before heading out:

"When I call out the warlord's approach, light the signal fires. Move as fast as Zoreh‒faster than the desert wind."

At the first signal fire she will yell out:

Once the fourth fire has been lit or you have failed:

Aubatha: "Quickly, to me. The warlord prepares to strike!"

If you fail to light the fires in time, she will reassure you.

When completed, speak to her:

"And with the signal fires lit and our defenders alerted, Zoreh finally collapsed. Such courage drove our ancestors to victory against the warlord and his band.
To understand her sacrifice is to understand Bergama."
I see. What now?
"Now, I bid you a fond farewell.
You honored our city by respecting Zoreh's memory. Tall Papa look kindly upon you. May you always find water and shade."

You can ask her about Zoreh again before you leave.

Before I go, what can you tell me about Zoreh?

If she is spoken to after this, she will send her best wishes to Breda.

"Give my regards to Breda. It has been far too long since I visited Eastmarch.'