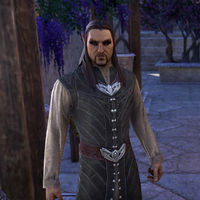 Aldarch Tilcalar is an Altmer member of the Monastery of Serene Harmony in Shimmerene. He's involved in the mystery behind the disappearance of newcomers. You'll first meet him after you've interviewed Razum-dar's list of suspects and you are on your way to return to Raz at the city gates of Shimmerene. Tilcalar will be reassuring a group of Altmer citizens that he has only their best interests in mind with his plan to sequester all newcomers.

Your next meeting will be at Kinlady Avinisse's party in the garden of her mansion. There, you will get to speak directly to the Aldarch. He is not very fond of outsiders, and does not appreciate being accused of working with Daedra. That accusation will make him leave the party early and invite Kinlady Avinisse to a meeting in the Coral Forest. 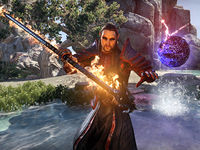 The Earl of Clavicus Vile with an abyssal pearl

The Earl of Clavicus Vile is Aldarch Tilcalar's true identity. He is a member of the Court of Bedlam and serves, obviously, Clavicus Vile. Very little about him is known; Kinlady Avinisse tells you that she could find no records about him prior to their meeting at Kinlord Milunthel's party. You will encounter the Earl briefly in the Undercroft of the Monastery of Serene Harmony, where you see firsthand what he has been doing the newcomers he imprisoned. Later, when you follow Kinlady Avinisse to the Coral Forest, you will have to fight him and defeat him, ending his murderous plan.

At the steps of the city gates: on approach you'll see Aldarch Tilcalar addressing a group of townsfolk with the following exchange:

Veranquel: "This is unheard of! Why have you closed the monastery?"
Aldarch Tilcalar: "Good people, I hear your concerns."
Indalinwe: "But the workers I hired? They were aboard the ship from Rivenspire!"
Aldarch Tilcalar: "The Kinlady and I, we have only your best interests in mind. Every guest must be sequestered while we ascertain their suitability for Altmer society."
Daalinden: "The Aldarch's right. Lock up the newcomers!"
Corimin: "Send the newcomers back where they came from ! We don't want them here!"

The next time you see him will be at Kinlady Avinisse's garden party. If you play a non-Altmer character, Tilcalar will greet you by saying, "How bold of you. The nebarra dares to stand in my holy presence. Very well, bold nebarra. What can the new Aldarch of Shimmerene do for you? And please, try not to bore me or spray any spittle on my spotless vestments."

If you have an Altmer character, he will instead say, "I see the Queen's decree has even attracted some of our wayward brethren back to our shores. But make no mistake. Altmer or not, you're as much a newcomer as one of those cats or lizards."

I hear that you and the Kinlady have a plan for administering the Queen's decree.
"You heard that somewhere, did you? Hmm. I'll have to have a discussion with the Divine Prosecution about how lax our security has become.
No, no. I jest. The Kinlady and I have nothing but the best interests of Summerset and the newcomers in mind."
Is that why you're sequestering newcomers and other non-High Elves beneath the monastery?

"You really are well informed about things here in Shimmerene, aren't you? For a nebarra."

You keep calling me "nebarra." What does that mean?
"You're right. Where are my manners? Using a word you couldn't possibly be expected to understand.
It means unwelcome. As in, you are not welcome here."

I see. And is it common for High Elf monks to conspire with Daedra?

To an Altmer character, he says instead,

"You really are well informed about things here in Shimmerene, aren't you? For an outsider. Oh, your heritage might be Altmer, but you aren't a native of Summerset. You simply don't have the bearing and cultured air of a true child of the island."
Like the High Elf monks I saw working with Daedra beneath the monastery?

Regardless of the above, he continues,

"That's a serious accusation to toss around so casually. What did you say your name was again? I want to make sure to add it to the Divine Prosecution's observation log.
For you own protection, you understand."
If you'll excuse me, Aldarch Tilcalar, I just remembered I have someplace else to be.

Tilcalar will also leave the garden party, commenting, "I suddenly remembered some business I need to deal with as well. Feel free to pester the other guests in my absence."

After the party, you follow Kinlady Avinisse to the Coral Forest and her meeting with Aldarch Tilcalar. You can hear the end of their argument as you make your way along the beach:

Kinlady Avinisse: "Murder? That wasn't part of the plan, Aldarch!"
Aldarch Tilcalar: "You know nothing of the plan, you fool. Let me give you a taste of what the Prince of Bargains has in store for this pitiful world."

At this point, the Aldarch's identity and connection to Clavicus Vile are revealed. 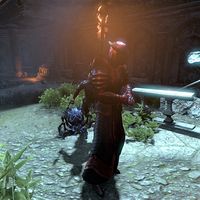 The Earl in the Monastery Undercroft

You will first see the Earl in the Undercroft of the Monastery of Serene Harmony. This investigation happens between your sighting of Aldarch Tilcalar on the steps, and your meeting with him at the Kinlady's garden party. Upon entering the Undercroft, the Earl will see you and proclaim, "More newcomers? Unfortunately, the magic only effects those who have been prepared. But never fear. Your turn will come." He will use an abyssal pearl to cast a spell that drains the gathered prisoners of all their health. He then leaves the Undercroft, leaving you to fight Yaghra and Skaafin and destroy the pearl.

Later, at the Coral Forest, you will hear him arguing with Kinlady Avinisse. He will be standing in a shallow tidal pool, in front of a particularly large growth of coral. By the time you find him, the Kinlady has run away. He will be dressed in his Court of Bedlam robes and have another abyssal pearl nearby. When you attack, he will taunt you: "Come, nebarra! Let me show you the power bestowed upon me by the Prince of Bargains!"

During the fight, he will summon yaghra: "Yaghra, destroy these fools!"

Once you have defeated him, you can destroy the abyssal pearl and confront Kinlady Avinisse about her association with him.

This Elder Scrolls Online-related article is a stub. You can help by expanding it.
Retrieved from "https://en.uesp.net/w/index.php?title=Online:Aldarch_Tilcalar&oldid=2209901"
Last edited on 14 September 2020, at 00:37