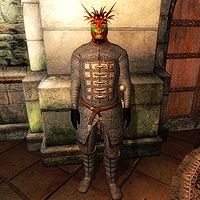 Usheeja wears a set of chainmail, which includes a cuirass, greaves, and a pair of boots. He also carries a back up brown shirt and light brown linens. He wields a fine iron shortsword, and carries the key to his house, as well as a small amount of gold.

Upon first meeting him he will immediately tell you about his job: "I work as a guard at Umbacano Manor. My name is Usheeja." When questioned about his employer, he will say: "I am one of his guard dogs, no more, no less. He pays us well to guard his many treasures. This is enough for me."