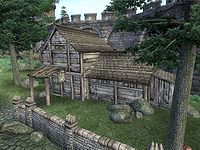 The Grey Mare is a small, humble inn located in Chorrol's Fountain Gate. It is found just to the east of the south gate.

The publican, Emfrid, buys potions and food while only selling the latter. The ground floor contains the reception area consisting of a counter and a dining room while the rooms are upstairs.

The room that you can rent is dark, small and quite bare, containing only a lower-class bed and a chest. The room next to yours, which is locked, is owned by Earana. You will find her sleeping here until the Fingers of the Mountain quest is finished. The bedroll inside is free to sleep in.