After reuniting Guilbert and Reynald Jemane in Separated at Birth, talking to Guilbert reveals the quest to help them reclaim their childhood home of Weatherleah. They say that their family was run off one day by Ogres, hence the separation. They can't remember where it is except that it was "South of Chorrol, north [sic] of Fort Carmala." However, it is actually southwest of Fort Carmala.

Asking around town will direct you to Sabine Laul who is a local explorer and member of the Fighters Guild. She'll tell you where Weatherleah is and kindly mark it on your map. Once Weatherleah is marked you can easily find it. Arriving on the scene you will find three leveled Redguard Valley Ogres. Dispatch them with whatever means you wish. 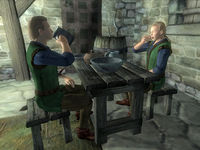 Head back to Chorrol to find the Jemane brothers. On the news that their home is once again ogre-free, they will want to return. Guide them back (they forgot where it is - remember, you can fast travel) to complete the quest and get a leveled gold reward.