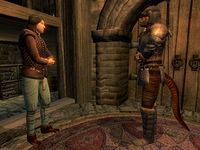 "Oh, you have been a naughty boy, Motierre, haven't you?"

Speak with Vicente Valtieri in the Dark Brotherhood Sanctuary to complete the "To Serve Sithis" mini-quest and receive Vicente's final contract. It seems Francois Motierre in Chorrol borrowed a lot of money from underworld types and has missed a payment. The lenders don't even want the money. They feel insulted and want him dead, sending an enforcer to kill him. Francois has hired The Dark Brotherhood to fake his death and take the life of his mother instead, a detail Vicente tells you has already been handled by Lucien Lachance. Vicente gives you the tools you'll need to fake Motierre's death: a single-use dagger coated with a special poison called Languorwine that can make it appear that a person has died, and an antidote to revive him later.

Travel to Chorrol and break into Motierre's house in order to speak with him. His house is located just north of the Chorrol South Gate and is protected by a Hard lock. Once inside, Francois tells you that those he is indebted to have sent the enforcer Hides-His-Heart to kill him. He wants you to use the dagger Vicente gave you to slash him once, fooling the enforcer into believing he is dead. You are to then flee Chorrol without killing the enforcer. That way Hides-His-Heart will believe Motierre is dead and return to his organization and inform them that a Dark Brotherhood assassin got to Motierre first. You are to then wait a day, locate his "body" in the Chapel Undercroft and use the antidote to revive him. 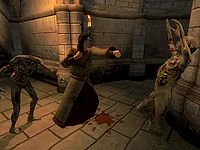 "Oh my, Aunt Margaret! You are looking the worse for wear..."

Hides-His-Heart will arrive shortly. Play your part in the charade and slice Francois once with your poisoned blade. The poison will take effect immediately and Motierre will appear to die. Hides-His-Heart will attack you at once, but if you harm him in any way you will acquire a bounty. Instead of fighting, flee Chorrol immediately. Return in one full day, go to the Chapel Undercroft and administer the antidote (activate the "corpse" and it will be administered automatically). It seems that revival is something to which the other inhabitants of the Undercroft take offense, seeing it as a desecration. After you have revived Francois, three Motierre Zombies will attack you (one right next to you and two others). Keep Motierre alive, as this is the only Dark Brotherhood mission that can be failed. The zombies can be avoided, as they spawn once you first talk with the revived Motierre. If you back away from him as soon as you wake him up and get closer to the undercroft door, you can talk to him there and quickly leave.

Kill or avoid the zombies and make your way to The Grey Mare Inn with Motierre so that he can buy passage out of Cyrodiil, then return to Vicente. If you successfully completed the quest, you will receive Cruelty's Heart, a leveled amulet that adds Willpower and Strength, advancement to Eliminator rank, and the Sanctuary Well Key. The key allows easier access to the Sanctuary via the well outside.

If you kill Hides-His-Heart, fail to save Motierre, or kill Motierre, you fail this quest. You are allowed to proceed with the Dark Brotherhood questline, but there are negative consequences. Vicente's disposition will markedly drop (-71, instead of +80 for successfully completing the quest); this may result in him turning aggressive, so you may want to be prepared with Charm spells. You will also not receive 1 Infamy point for this quest. Additionally, several rewards will be delayed until the completion of the next quest, The Lonely Wanderer: he will not give you the well key, you will not gain the rank of Eliminator, and, if you are playing on Xbox 360, you will not obtain the achievement for the rank of Eliminator.

Vicente will no longer be your liaison in the Brotherhood after this quest; instead, you will receive new contracts from Ocheeva.