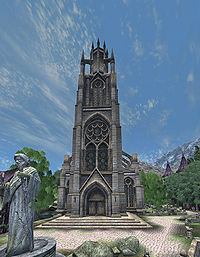 The Great Chapel of Arkay, Cheydinhal

The Great Chapel of Arkay is in the east side of Cheydinhal, next to the stream and facing several residential homes. This chapel specializes in Intelligence and Health.

The building is divided into The Great Chapel of Arkay, the Chapel Hall, and the Chapel Undercroft.

With the Knights of the Nine official plug-in, a battle takes place between the player character and Aurorans in this chapel during The Sword of the Crusader. The changes this event brings about are noted below.

The Great Chapel of ArkayEdit

The Great Chapel of Arkay

All three main entrances to the chapel lead into an entrance elevated from the main room ahead. The four barrels and three sacks here contain clutter, and the barrels may also contain a repair hammer. A short set of stairs here leads down to three doors; two on the west wall to the undercroft, and the one on the east wall to the chapel hall. There are four more barrels and three more sacks here, similar to the ones above. The bookshelf here contains only common books and dishes. The large cathedral altar sits at the end of the main room, and altars to each of the Nine Divines surround it.

In the main room of the Chapel Hall two food barrels sit in the west corner, along with three more in the east corner, and another two in the south corner, next to two food sacks. The two wine racks in the east corner hold 24 bottles of cheap wine. The table in the middle room is set with two loaves of bread, two bottles of Surilie Brothers Wine, and a bottle of Tamika's West Weald Wine in the middle and four plates, one at each seat, each holding venison and a potato.

The doorway on the southeast wall leads to two sets of stairs; the one to the northeast leads down to a small bedroom with a single bed in the west corner. The chest next to it, with a bottle of Surilie Brothers Wine on top, contains clutter. The cupboard on the curved wall contains clothing, and the desk next to it (with a loaf of bread sitting on top) contains clutter and/or a common book.

The set of stairs to the southwest leads to Errandil's room, with a single bed in the north corner and a clutter chest next to it. The desk on the curved wall contains clutter and/or a common book, and the cupboard next to it contains clothing.

The door between the stairs beyond the main entrance room reveals Gruiand Garrana's bedroom, with a double bed against the wall opposite the door. The chest of drawers in the west corner contains clutter and has two bottles of Tamika's West Weald Wine on top, and the cupboard next to it contains clothing. The chest in the east corner contains more clutter, as does the chest in the north corner with two pumpkins on top. The desk next to it contains clutter and/or a common book, and on top of it sit two apples.

In the central room of the Undercroft there are four tombs along each side of this room, with a ninth opposite the doors. Between the second and third tombs on each side is a set of stairs leading down to another small tomb area. The northern one has three more tombs and two altars. The southern one two more altars and three more tombs; the tomb opposite the stairs is Countess Llathasa Indarys's tomb, which contains jewelry and clothing. Opening her coffin will summon Llathasa's Spirit, a leveled ghost/faded wraith/wraith enemy.

The Chapel Guard will appear in the undercroft during the quest The Elven Maiden. If she isn't killed during the quest, the guard will remain there indefinitely. If you are a PilgrimKotN of the Nine Divines faction, she won't be hostile.

With the Knights of the Nine plug-in installed, the Great Chapel of Arkay is attacked by Aurorans during The Sword of the Crusader. Upon entering, Aurorans can be seen swarming the chapel and Ohtesse's body lies at the head of the stairs. Errandil's corpse can be found near the main cathedral altar, and Dwemer runes have been written in blood partway around it. A copy of The Song of Pelinal, v 7 is on the desk in the small northernmost bedroom, The Adabal-a is on the desk in what was Errandil's bedroom, and Shezarr and the Divines is on the table in the main entrance room.