Wraiths and all of their variants are often encountered throughout the darker parts of Cyrodiil. Wraiths are categorized into the weak Faded Wraiths, common Wraiths, and the far more powerful Gloom Wraiths. The higher level the wraith, the higher their health and the stronger their spells. All wraiths have a unique and debilitating curse that they frequently employ, and they are immune to silence. Most wraiths have several additional spells, in particular ones that deal frost damage and silence targets. As further protection, roughly half of all wraiths carry a leveled sword.

Wraiths are relatively large hovering ghosts that wear tattered black robes (except Gloom Wraiths, which wear purple). Faded Wraiths and Wraiths are nearly identical in appearance; the only difference is that Faded Wraiths are more transparent. The two weaker types both have sickly green skin and deep black eyes, while Gloom Wraiths have a lighter brown skin tone and glowing white eyes nestled in large eye sockets. Gloom Wraiths are most easily recognizable by the crown perched on their ghostly heads, evidently a symbol of their previous status while still living. When nearing any wraith, you may notice a high pitched keening like the wail of a banshee. Upon death, yellow-green vapor comes out of their mouths and they collapse into a pile of robes. 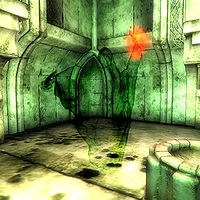 Faded Wraiths are considered the weakest variant of wraith and are commonly encountered at lower levels. However, don't underestimate them, as they can be a challenging opponent to anyone not prepared with silver, Daedric, Dremora, or enchanted weapons.

Wraiths are encountered at the middle levels. They are much stronger than Faded Wraiths and should be approached with caution. It is strongly recommended that you enter combat without having an almost full inventory, as they make good use of burden spells that deprive you of all ability to evade their other attacks.

Gloom Wraiths are the strongest variant of wraith, and appear only at the higher levels. They differ greatly in appearance to other wraiths, and are formidable foes in battle. They are commonly encountered in large numbers in chapel undercrofts, so take care in entering.