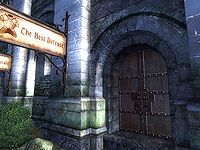 The Best Defense is an armor store located in the Imperial City's Market District. It is found across the street from Rindir's Staffs and next to The Gilded Carafe and the Office of Imperial Commerce.

The store is jointly run by Varnado and Maro Rufus. Also living in the shop is Gin-Wulm, the in-store smith who is the Armorer master trainer. 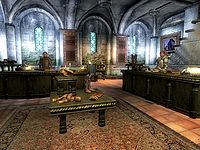 The main trading room is on the ground floor, and consists of separate counters for the two vendors who each have a selection of their wares on display. The wares are arranged meticulously and several candles cast an inviting glow over them. The front door opens to the sight of an exhibition table standing in the middle of a big carpet. It holds a pair of fur boots, iron boots, and fur greaves. A small podium holds a fur helmet.

Along the stairs is Varnado's desk, and it holds, not surprisingly, a wide variety of heavy armor. A podium showcases a pair of iron boots, and on the desk are an iron helmet and an iron cuirass. Following the desk towards the basement door sit three handbills: one for Rindir's Staffs and two for First Edition. Next to a few copies of Manual of Arms lies a steel cuirass, some iron greaves and, on another small podium, a steel helmet and a pair of steel boots.

Maro Rufus' desk holds, as to be expected, several pieces of light armor. Starting near the wall, there's a small podium with a pair of leather boots. Next to that is a leather helmet and a sack with clutter, which doesn't respawn. In the middle of the desk, a leather cuirass has been carefully laid out. Behind the desk, on a table, a lectern holds writing materials while the sack holds clutter. They are safe containers. Following the wall, there's a writing desk with even more clutter, but on top of it, two scrolls: one of bound gauntlets and one of absorb skill: Blade. At the foot of the staircase leading upstairs, there are two sacks with clutter and two barrels with food. These two sacks are safe containers and do not respawn. 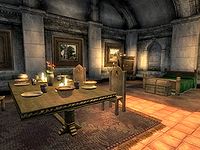 The Private Quarters is part dining room, part bedroom. This is where Varnado resides. Next to the entrance, a set of shelves holds three potatoes, a pumpkin, and a watermelon. Following the wall towards the corner, a cupboard holds drinks while the dinner table only holds four strawberries in a bowl. In the corner near the bed, there is a cupboard filled with clothing, while the locked chest at the foot of the bed has a chance of some jewelry, gold, or silverware. The chest of drawers holds clutter and on the top sits a flax tunic and a pair of clogs. The unlocked Display Case has two Bronze Amulets on display while the chest to the right of the alcove contains randomly selected equipment. Inside the alcove, the chest, the sack, and the desk all hold clutter. The little sack is a safe container. The two chests (the one with armor and the other one near the bed) are also safe containers, which do not respawn. 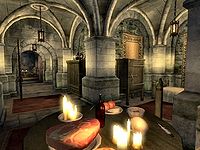 Halfway down the stairs, on the landing, sits a chest with clutter, and further down, a sack with food and a few gold coins. The sack is a safe container. At the bottom of the stairs, there is a hallway with two doors, each respectively leading to Gin-Wulm and Maro Rufus' bedrooms. At the end of the hallway, there are some shelves and a barrel with clutter, and on the floor, an entrance to the Market Sewers.

The northern door leads to Maro Rufus' bedroom and opens to the sight of a cupboard filled with drinks, atop which sits four bottles of cheap wine. On the small dinner table, you can find a piece of ham, a bread loaf, a cheese wedge, two apples, and ten blackberries as well as a bottle of cheap wine. The cupboard near the bed holds clothing.

The southern door leads to Gin-Wulm's quarters. On the candlelit table, there is a lectern with clutter and/or a book. The lectern is safe to store items inside. The wine rack near the dinner table holds eleven bottles of cheap wine, and on the floor underneath it lies a repair hammer. On the table, there is even more food: two potatoes, two loaves of bread, and a cheese wedge. On the side, and not exactly hidden, are two bottles of skooma. The chest of drawers near the bed holds clothing, and a blue & green outfit sits on top.