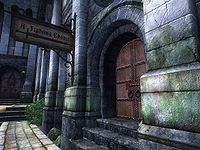 A Fighting Chance is an armor and weaponry store located in the Imperial City Market District. It is found across the street from the Warehouse and next to The Merchants Inn and The Main Ingredient.

The proprietor, Rohssan, has 1200 gold and a Mercantile skill of 80. When bartering, she will buy your weapons, armor and miscellaneous items while only selling blades. Her wares include the unique Battleaxe of Hatred, which has damage Strength, Endurance and Willpower enchantments. Rohssan also offers repair services and advanced Armorer training. 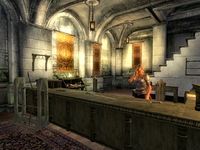 The main trading room is on the ground floor and consists of a counter and a display of blades, bows and helmets as well as some archery practice targets. Despite the uncovered windows and the fact that Rohssan has lit up several candles, the room still appears a bit dim and the displayed wares can be hard to see. The front door opens to the sight of the two practice pads along the northern wall, and, in the opposite corner, a small seating arrangement for waiting customers. In front of the counter, against the eastern wall, are two weapons racks with four iron bows on display. On the counter sits a small chest of drawers filled with clutter, as well as a selection of various blades: a steel claymore, a fine iron longsword and an iron shortsword. The adjoining counter holds a couple of handbills, one from The Main Ingredient and one from Edgar's Discount Spells. The lectern holds clutter and the occasional book. This is the only safe container in this room.

Underneath the windows are two exhibition tables with more weaponry: The southernmost table holds a steel dagger and an iron claymore and the other table holds an iron dagger, a repair hammer and an iron war axe. In between the tables sits another weapons rack with a single steel shortsword. The unlocked chest behind the counter holds clutter, while the nearby table has three helmets on display, iron, leather and steel, respectively. The desk near the northern wall holds clutter but has a copy of Manual of Arms and two handbills sitting on top: one from the Mystic Emporium and one from The Feed Bag. 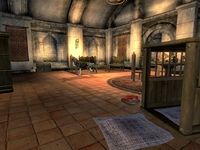 Rohssan lives upstairs, as is usual with Imperial City houses and stores. Her private quarters consist of an antechamber with a dining table, a second room with a bed, a working table, and a small library. The area is also the home of Rohssan's Dog, who will attack you on sight, so watch out. The door opens to the sight of a small dining arrangement in the northwestern corner and on the table sits an apple, a cheese wedge, and a knocked-over bottle of mead. On the western wall, near the door, a chest with randomly chosen equipment and a sack with clutter. They don't respawn.

The well-dressed dinner table seats three and holds a wide array of foods: Three wedges of cheese, two radishes, two leeks, two ears of corn, another apple, a bread loaf and on the side, two bottles of mead. The dog is also well provided: near the kennel is a plate with a piece of venison. The cupboard between the door and the alcove contains dishes, and another cupboard inside the alcove holds food. The locked chest here holds several items, from expensive equipment to useless clutter. During the Thieves Guild initiation quest, it will also hold Rohssan's Antique Cutlass. This chest is another safe container.

In the bedroom area, in the northwestern corner, is Rohssan's bed and next to it, a cupboard with clothing. Next to the cupboard, leaning against the wall, is a leather shield and a pair of leather boots. The unlocked chest here has a chance of some jewelry, silverware and/or gold. It's also safe for storage. The working table contains clutter while the bookshelves behind it contains the Armorer skill book Last Scabbard of Akrash, as well as copies of Mysterious Akavir, The Eastern Provinces, Gods and Worship and volumes 3 and 4 of The Real Barenziah. 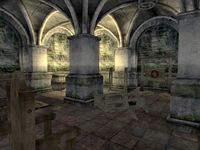