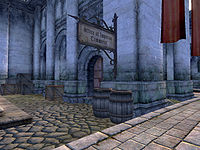 The Office of Imperial Commerce

The Office of Imperial Commerce is a building in the Market District of the Imperial City. It is located next to The Best Defense and across the street from Rindir's Staffs.

It is the local complaints board for unsatisfied customers and merchants alike. The owner, Vinicia Melissaeia, will sell you a house for 2000 gold. The Office of Imperial Commerce is notorious among Imperial City citizens because no matter how serious the complaint is, nothing ever happens. 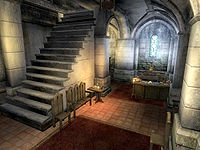 The front door opens to the candlelit reception room, with two long rows of chairs for waiting customers placed along each of the walls leading to the counter. More chairs can be found at the foot of the stairs, and a table provides a bit of reading material, namely: Biography of Barenziah, v 1, The Eastern Provinces, and Guide to the Imperial City. Another table can be found near the counter, with even more common books; one copy each of Beggar Prince, and Gods and Worship. Near the basement door is a desk, a sack, and two chests of drawers, all with clutter.

The small counter is placed in the southern end of the room and on it sits a copy of the Mercantile skill book The Wolf Queen, v 4, along with two handbills: one from The Feed Bag and another from Red Diamond Jewelry. Also on the counter are an apple in a bowl, a bottle of cheap wine, and a sack with clutter. Hidden behind the counter is a set of drawers on top and another underneath a table; both hold clutter. A chest with a chance of some silverware, jewelry, or gold sits nearby; this second chest and the sack are the only non-respawning containers on this level. Vinicia Melissaeia can be found here every day between 8am and 8pm. 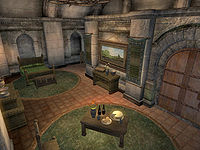 Vinicia's private quarters is located upstairs and appears, compared to the other Market District buildings, somewhat small and sparsely decorated. The dim lighting comes from a few lit candles strategically placed around the room. The door opens to the sight of a small dining arrangement with two wedges of cheese, a cheese wheel, and two bottles of Tamika's West Weald wine. Vinicia will eat her breakfast here every morning at 6am.

Along the northern wall is a chest of drawers with a lectern on top. Both of these hold clutter. Against the opposite wall, two additional chests of drawers can be found, one with clothing and one with clutter. The unlocked chest at the foot of Vinicia's double bed contains up to three pieces of leveled equipment and is the only non-respawning container in this room. The alcove in the northeastern corner hides a well-provided dinner table with a wide array of food: three pieces of venison, two apples, two wedges of cheese, a bread loaf, and two bottles of mead. 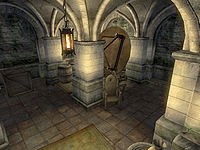 Halfway down the stairs leading to the basement, on the landing, is a barrel and a sack, both with clutter and a slim chance of a few pieces of gold or a lockpick. The main basement area is dark and messy, with many knocked-over chairs and tables. At the foot of the stairs, a broken chest holds a few common books, including two copies of Trials of St. Alessia, two of Guide to Cheydinhal, and three copies of A Children's Anuad. Near the big table leaning against the wall are two barrels. Both hold clutter but have a slim chance of a repair hammer or a torch. The crate in the southern corner holds clutter. Near the pillar next to the crate are an open food sack and a closed clutter sack. In the last corner are two barrels and a sack, all three containing clutter or clothing. The crate and barrels respawn, but the sacks do not.