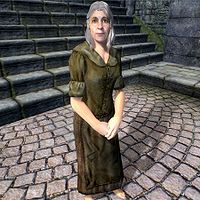 Simplicia the Slow is an Imperial beggar living in the Market District of the Imperial City. Her bedroll can be found behind A Fighting Chance. Simplicia is inflicted with Helljoint.

She lives the monotonous and hard life of a typical beggar, although the Market District is a good resource for food. She wakes up every day at 6am and immediately heads to the gate leading to the Prison District for six long hours of begging. At 12pm she will head to the center of the district and try her luck with the many townsfolk passing by. At 6pm she will grab a piece of food from one of the sacks in front of The Feed Bag and will have dinner for two hours. However, if there is no food in any of the sacks she will keep begging until 8pm. After her meal, she will head to the garden between A Fighting Chance and The Merchants Inn and stroll around until her bedtime at 10pm. She will stick to this schedule even on rainy days.

Her only possessions are the clothes she is wearing, a collared shirt and coarse linens.

She, and the other beggars around Cyrodiil, will point you in the right direction if you wish to find the Thieves Guild, if she has a disposition of 70 or more towards you and you have also read one of the wanted posters of the Gray Fox scattered around the Imperial City.